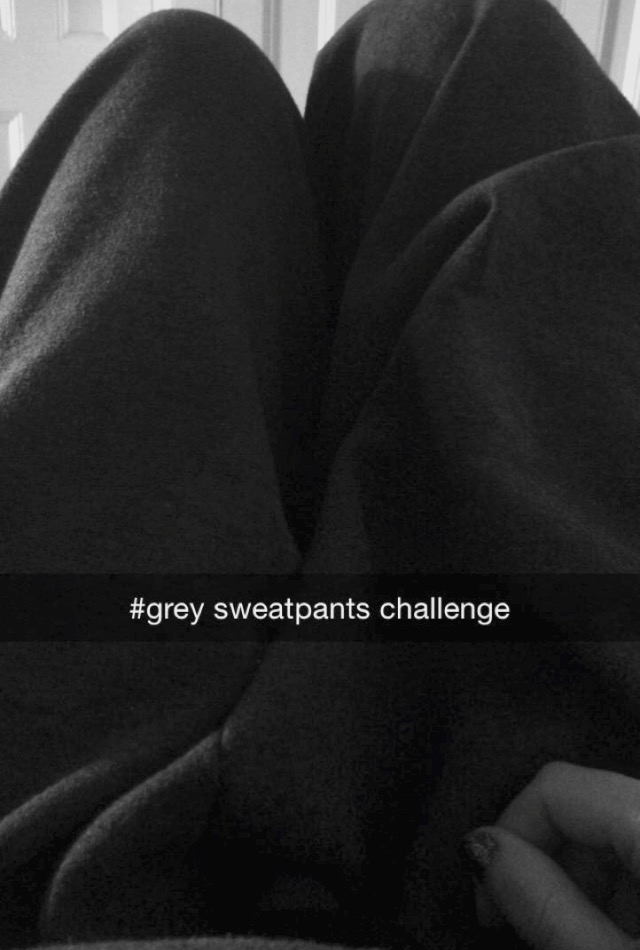 So I realized that, like, this whole month of posts has been angry and sad. Like, alternating: angry, sad, angry, sad. Sometimes you’d get angry, with a bonus of sad! Upon self- and blog-reflection, I became worried. Worried that I’d become a jaded, angry person who would never find the sun again. That I was turning into one of those old cranky, hard shells of a bitter person. Mainly because I hated Stranger Things while everyone else apparently loved it? I guess between the depression I’ve been bogged down in, and hating Stranger Things, I had reason to worry that I was crawling into a cave of anger through which no light could enter.

Then, there came a ray of light into the darkness, in the form of The Grey Sweatpants Challenge.

Me: y'all so annoying with these damn twitter challenges

Its original intent was noble: to showcase the outlines of erect penises in grey sweatpants. I think erect penises are pretty swell. I also wear grey sweatpants around the house from October until… until I have to wash them, pretty much. I was really ready for the #GreySweatpantsChallenge.

I'm trying to see real dick but the hashtag is bombarded with people trying to be funny #GreySweatpantsChallenge pic.twitter.com/r2c1hdhd0t

But not without controversy! What was to stop a participant in the #GreySweatpantsChallenge from pawning off an inanimate object as his member? A girthy cucumber? An empty bottle of SmartWater? A canoe paddle? If this election — I know, I promised myself I wasn’t going to bring it up, dammit — if this election has taught us anything about the “truth” on the Internet, it’s that everything we thought we knew was lies! So, why not have some fun with it?

And thus a new challenge came out of the #GreySweatpantsChallenge: one where the participants would shove the largest and most absurd object in their pants to try to pass it off as their penis. This is where hilarity ensued.

I’m stuck in jury duty all day today, so while I’m miserable, please enjoy my hand-picked highlights from the #GreySweatpantsChallenge:

Most haters will say it's a box of Panettone #GreySweatPantsChallenge pic.twitter.com/vyekCFG3dF

is it too late to show off the goods? #greysweatpantschallenge pic.twitter.com/iYsoMAEyAx

Haters will say this is a 2004 Dell Windows XP Professional Desktop Intel i4 Processor. Let them think that. Smh #greysweatpantschallenge pic.twitter.com/v016stupF9