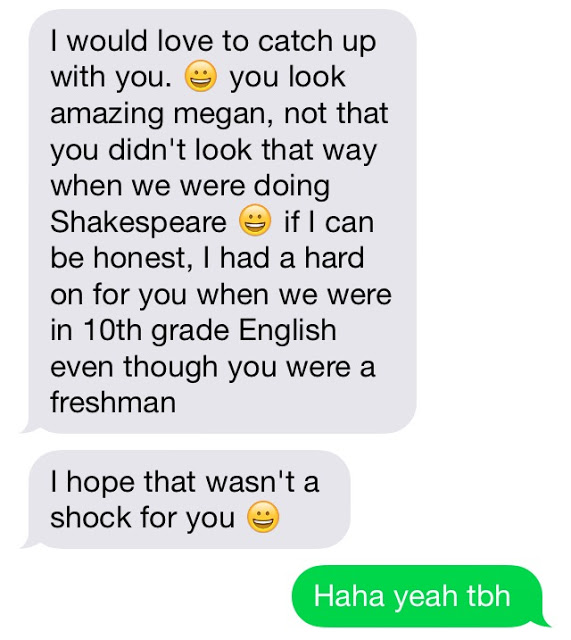 How do you talk to women online?  I didn’t think it was so difficult, but my recent experiences suggest otherwise.  Old friends – and I mean like friends from a decade ago – have been getting back in touch with me in a bad-touch way.  What am I trying to say? This is a typical conversation:

Dude I haven’t spoken to in eight years:  Hi!

Justifiably surprised but friendly Me:  Hi!

Dude:  We should catch up!

Yeah, that actually happened.  I bet it happens to you all the time, too.  What do you think I’m going to say?  “Oh yes I just decided I want to drop everything and travel three hours to a different town to have sex with you?”  I’m barely interested in having a conversation via Facebook messenger, much less carnal relations that require me to take a Greyhound bus.

Apparently, Facebook is the new dating site. Um, WHAT.  Yes, having an account now apparently means that you’re DTF, FWB, NSA, and all the other Jersey Shore acronyms that mean “available for an immediate screw.”  Remember the lawyer who got hit on through her LinkedIn account?  Apparently the takeaway lesson is that EVERY site is a dating site, and all Social Media platforms are fair game for flirting.  Now more than ever, I am concerned for my mother’s presence on Facebook.  As if things weren’t bad enough when we were constantly getting notifications for Candy Crush Saga, now we’re subjected to Nostalgic Crush Saga?!

Dude I hooked up with one time a decade ago: Hi!

Me wondering what the fuck is up here:  Hi!

Dude:
Just wanted to say you look really good these days and I’ll be coming
to town in three weeks and I thought we should have a cup of coffee or
drink or whatever and ohbytheway I still would fuck you.

So yes, I am on Facebook, Twitter, Instagram, etc.  And no, I have not explicitly stated my relationship status.  I realize this is the cardinal sin, but hear me out:  in my day, changing your Facebook status to “In A Relationship” was a big, serious step that you took with your boo (ancient word for “bae”) to declare your love for one another to cyberspace.  Not some scuzzy “I have a boyfriend” buffer of protection to keep random fuckbois from your Sociology of Economics class back in 2004 from DMing dick pics out of the blue.

What’s the solution here?  Will I be forced to buy into the “Relationship Status Statute” or be repeatedly and aggressively hit on by Ghosts of Facebook Past?  Or will it be enough to cleverly change the subject?:

Dude:  Back in 10th Grade English, I used get hard thinking about you.

Me:  Back in AP Honors Lit, I used to get hard thinking that Leonardo DiCaprio would crash through the window dressed in character from Romeo + Juliet with a puppy in one hand and a diamond ring in the other and ask me to marry him and then write me a note to get out of gym class.

Me:  I’m sorry, I thought we were exchanging fantasies from sophomore year of High School.  Thanks for dropping me a line and catching up!

Dude:  Did I say something wrong?

That was the one that really burned me up:  the guy who asked “did I say something wrong?” Honey, YA THINK?!?!?  Hell, it’s one thing to get random DM’s on Instagram like this:

…and it’s quite another to imagine that someone you consider a “friend,” even in the loosest sense of “Facebook friend,” ‘liking’ your vacation pics and then fapping it over them!  Holy crap!  Guys, I don’t give a shit WHAT my “Relationship Status” is, I don’t want to log on to Facebook just so you can hit on me.  I’m here for the same reason everyone else is:  to reply “Maybe” to social invitations I have no intention of attending, to watch videos of baby goats, and to make sure that jerk who broke my heart three years ago is still balding.  Anything else is a violation of Facebook’s Terms of Use, in my opinion.

In case you’re REALLY “hard up” for ways to talk to women, here’s ten things you can say to your female Facebook friends that aren’t in direct reference to your penis:

1.  Have you seen Deadpool?
2.  My, that Donald Trump guy sure is something!
3.  This weather is so unpredictable!
4.  Who are your favorites in Season 8 of RuPaul’s Drag Race?
5.  Did you wear green for St. Patrick’s Day?
6.  Did you hear the guy we went to high school with is running for mayor?
7.  How is work going?
8.  Where do I get good bagels in Brooklyn?
9.  Can you believe there isn’t a single Wal*Mart in New York City?
10.  Fucking literally ANYTHING ELSE THAT DOESN’T HAVE TO DO WITH YOUR PENIS!

Look, I get it, talking to people about things that aren’t your trouser snake is HARD, no puns intended.  I’m not gonna unfriend you, honey, but I’m definitely showing your pathetic attempt at “flirting” to my BF, BFAM, GBFF, etc.  And I can’t promise this won’t end up on my blog.

**note:  I wrote this post several weeks ago, and in the weeks between writing and publishing I just got sick of “hi sweetheart” and “you look amazing” in my FB messenger so I changed my relationship status to “In A Relationship” from what it was, which was blank.  Because I didn’t think it mattered on Facebook.  Let’s find out if it does.