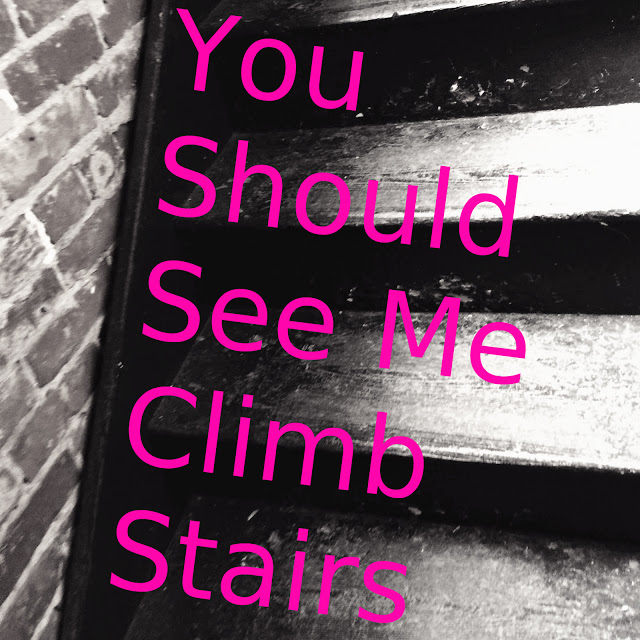 I first ran head-on into my own mortality when climbing stairs.  Well, not so much “ran” as moaned and puffed into it.  Really, what is more humbling than making it halfway up a flight of stairs and coming face-to-face with the realization that you aren’t as young as you once were?  Your thighs burning, your knees aching, that cold wheeze in your chest and the phrase “Gee, I’m out of shape” stumbles out of your lips and suddenly all your hair turns white like Jean Valjean’s and all you have to look forward to is a falsetto solo and a death scene.  My, you’re old.

But maybe we can deflect a while.  It’s not me, it’s you.  It’s the stairs!  Stairs:  they suck.  Not always on the down, as Norma Desmond demonstrates, but definitely on the up.  A cursory glance at fitness articles on the internet shows that while climbing stairs is a great way to get fit (Rocky), in the long term, stairs can cause stress and pain in knee joints.  Are stairs secretly evil?

The answer may lie in ancient history.  Mayan temples were routinely perched atop staircases reaching up as high as two hundred feet!  Of course, back then, the average human lifespan was like30 years, anyway.  They didn’t have to worry what would happen when they turned 31 and found themselves unable to wheeze up all those damn stairs.  And then what happened to the Mayans?  They all died!  And nobody seems to really know why, exactly.  There are theories, of course, but I cast my suspicious eye on those damn stairs.

I dream about stairs often.  I would be in transition from one phase of REM sleep to the other, and find myself spiralling down a rickety, shaky staircase.  As I’d climb, the stairwell gets narrower and narrower, tighter and smaller, forcing me onto my hands and knees as the stairs get steeper and higher, climbing like Alice in Wonderland when she got too big for the house, trapped in a never-ending in-between space just climbing and climbing until I fall…fall…fall…

But these were only dreams!  I hesitate even to call them “nightmares” because New Yorkers know that the real nightmare is climbing a flight of stairs in the subway.  You’re almost out of the station, almost home free, when suddenly the trudging line of commuters on the stairs ahead of you grinds to a dead halt.  Your single-file line is stopped dead or worse, plodding upwards at a rate that is physically impossible for upward and forward trajectory.  Heaving your weight up each step, one leg at a time, only to hover with your leg half in the air, waiting for the procession to move forward so you can put your damn foot down, having to touch the handrail to keep your balance!  Or worse, using the handrail to pull yourself up as the waiting and the heat from the station have made you weak, and you can’t keep up with the surprisingly strenuous task of climbing stairs in super-slo-motion.

If lucky, you’ll catch a break in the stair-dirge and zip to the left, sprinting up the stairs, escaping the herd of Romero-era zombies trudging up the stairs.  By the time I get to the top, my heart is strained to bursting and I’m sucking painfully cold gasps down my windpipe!  Stopping to wheeze at the top of the stairs, dizzy, the Walking Dead stair-climbers look at me as if to scoff “what’s her problem?”  I don’t have a problem!  I just wanted to climb the fucking stairs!  In fact, you could learn how to climb stairs from watching me!  Yeah!  You should see me climb stairs!  You just might learn something!