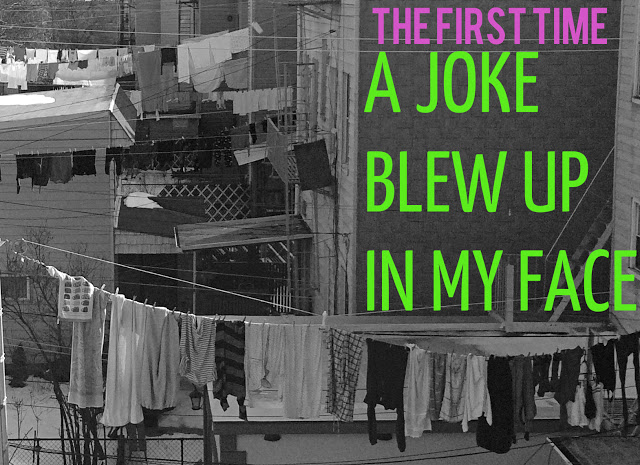 I live to tell jokes.  Always have, always will.

Fact: at a party, an acquaintance pulled me aside to tell me he admired my Twitter hashtag.  That compliment meant more to me than shaking the school board president’s hand at my High School graduation.  Being laughed at – or with – is the highest compliment I could possibly receive (aside from a retweet, hollllaaaa).

You see, it’s hard out here for a jokester.  Ask any stand-up comedian who’s ever bombed a set:  there’s nothing worse than putting yourself out on the line to blank stares, blinking, a throat-clearing cough and “actually, I am planning to vote for Trump.”  SCREEECH, record scratch, cue the furious backpedaling and apologies.  Shit, I’ve had so many jokes blow up in my face (this weekend alone) I should start wearing protective eyewear.

You never forget your first time, and I haven’t forgotten the first time one of my HILARIOUS EDGY JOKES blew up in my face.  I would’ve been 7 or 8, and my summer vacation revolved around playing with my younger brother on the swingset in my backyard.  From the top of the slide, we could see a little girl, about our age, playing alone in the next-door-neighbor’s backyard.  “Hey!” we shouted over the fence, because that’s what you do in 1992: “Come play with us!”

We opened the gate for Polly, an only child my brother’s age (6?), and invited her to partake in our swingset.  Our neighbors were her grandparents, she was visiting them for the summer.  But enough introductions!  It was time to throw down some sick rhymes:

Well!  This was highly improbable, given that I was a very modest dresser as a child, and would likely have been wearing long pants and a turtleneck in August.

“I’m rubber, you’re glue, whatever you say bounces off me and sticks to you!”  I retorted.  Drop mic, we out.

Don’t ask me why it went down like this, this was the way kids talked in the early nineties.  We didn’t have Twitter or Facebook as outlets for our profound little thoughts.  We had swingsets.  Do today’s kids still taunt each other about their underwear?:

“I see London, I see France, I see Zayden’s underpants are SO last season!  Does your mom even know how to lean in, bro?”


“Suck it, Quayden, your mom buys your underwear at GAP Kids because she’s so dumb, she isn’t even aware of the rampant human rights violations in the overseas garment industry!”


“Woah, Splayden, don’t get your genetically-modified cotton briefs in a bunch!”

And, back to scene:  my brother, myself, and Polly were swingin’ and slidin’, trading “see your underpants” and “I’m rubber you’re glue” around and around like some really uninspired slam poetry MeetUp when I was struck by an idea for the ULTIMATE joke:

“I see London, I see France, I SEE POLLY’S UNDERPANTS ON THE CLOTHESLINE!!!”

SCREEEECH.  Time stopped.  My brother froze midway down the slide.  Polly was stuck in mid-air on the swing.  Staring.  Blinking.  I have come to know that face quite well now: it is the horror-stricken face of a joke gone terribly, terribly wrong.

In what has gone down in history as the first time I ever told a joke so offensive it literally caused a friendship to crumble, Polly siltently dismounted the swing and walked calmly to the gate of our fence, lifted the latch, closed the door behind her, and disappeared into her grandparents’ house.

Aha.  Polly can dish it out, but she can’t take it.

Would you be surprised to hear that we never spoke again?  Playing in our respective yards, side-by-side, for the rest of that summer and even more summers to come.  Polly holds a grudge, you guys.

If you’re waiting for a tidy moral to this story, I’m sorry, it’s not coming.  I’m not going to tell you that I learned never to tell jokes again.  I’m not going to say I grew up and learned the meaning of the word ‘tact.’  Nope.  Fact is, I just dropped this awkward memory here to prove that I’ve always been damaged in this way: unable to read the situation, feel the room, watch my mouth, whatever.