If you logged onto OkCupid in 2013 and searched for ‘women’ in their late 20’s in the New York area, you’ve probably seen this baby’s face: 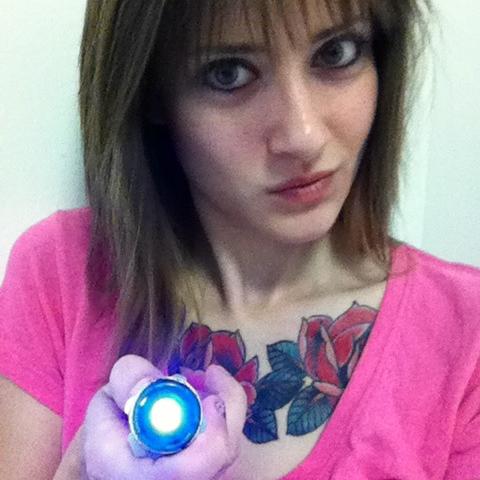 All T no shade, I pulled a lot of nerd with my sonic screwdriver photo.  Don’t hate, appreciate…

Nerd.  Geek.  Dork.  Whatever your vernacular for that Comic Book Guy, the chick with the back brace, the kid with the ukulele.  The generic slander used to malign the smart kids who went to prom “in a group.”

For years we were forced to hide our passions for Star Trek and Dungeons and Dragons from the world.  And then there was The Big Bang…Theory.  Suddenly, nerds were cool!  On television!  At least, in “theory.”  The Nerd Renaissance is finally taking off, and I couldn’t be more happy!

Facebook CEO and father Mark Zuckerberg recently replied to a commenter on his own Facebook post.  The commenter said she encouraged her granddaughters to “date the nerd” because that nerd might turn out to be successful later in life.  Zuckerberg told the commenter to encourage her granddaughters to be the nerd, to take ownership of their own success!  YES!  Nerds totally rule!  I totally agree: I think you should be a nerd AND date a nerd!  Not because dating nerds increases your chance of marrying rich, ew, get out of here with that misogynistic old crap.  Be the nerd AND date nerds because we’re awesome:

1.  Nerds have interests!  ever go on a blind date with someone and ask “What do you do for fun?” and get this response:  “Oh uh drinking with my friends, hanging out”?  WOW.  Delete that number from your phone, that person is boooooring.  Whereas, go on a date with a nerd and ask for their interests, and you may find yourself planning a follow-up date to laser karaoke bowling, a live film event, the museum with the world’s largest public collection of David Cassidy lunchboxes?  Nerds aren’t afraid to have interests, and that’s what makes them interesting people.

2.  Nerds always have something to say!  Ugh, breaking the ice with a stranger on a date can be paaaaainful.  Unless, of course, that stranger has an encyclopaedic knowledge of dinosaurs.  Then it’s awesome.  No awkward silences when you can teach them about AI in artificial limbs, or they can bring you up to speed on the latest in space research.  All those interests make nerds voracious learners and those people will never have a boring conversation about how slow the trains are.  Zzzzzzz…..

3. Nerds fight for what they believe in!  Ever see a pair of nerds throw down in a Marvel vs. DC argument?  Star Wars vs. Star Trek?  Nerds have strong convictions and fight for them – you’d better believe it!  You want a passionate companion who will stand up for you, or a sparring partner who’ll heat up your evenings debating which is the best Doctor, 10 or 11?  It’s totally 10, by the way, and you’d know that if you were really a nerd!  Sorry, sorry, I just get really passionate about this!

4.  Nerd know romance!  Comic movie geeks know Spidey ‘n’ MJ’s upside-down kiss.  Anime geeks swoon over Seiya’s passion for Usagi.  Buffy and Angel – or is it Buffy and Spike?  Well, you get the idea.  Half of what nerds squee about is romance – hey, “shipping” doesn’t refer to the Battlestar Galactica, after all!  Why do you think “fan fiction” exists?  Nothing matches a nerd’s rich romantic fantasy life – and other nerds get that.

So whether you’re looking for a “companion” (Doctor Who) or a “companion” (Firefly), I advise you to let you geek flag fly.  Drop a Star Trek reference into casual conversation and throw your drink in their face if they don’t take the bait.  Cuz you’re a nerd, baby.  And you deserve better.