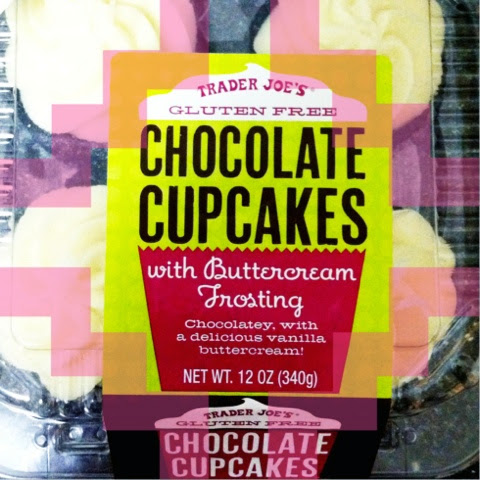 Trader Joe’s Gluten-Free Chocolate Cupcakes
Tastes Like:  ladies and germs, you had better believe that I have searched the world over and tasted my fair share of gluten free cupcakes and I am here to tell you that, without a single doubt, these are THE ABSOLUTE BEST GLUTEN-FREE CUPCAKES YOU WILL EVER EAT.  Why?  Because they are moist, moist, moist!  They are also a slightly darker chocolate flavour, which nicely compliments the buttercream – keeping with tradition, it is just this side of sickeningly sweet.  Altogether, these are the total package.

Perfect For:  people who can’t have gluten.  Boom.  Speaking of which, there are times when “gluten-free” often means “shitty alternative that’s not even better than no alternative” but this is NOT, I repeat, NOT one of those times.  These cupcakes taste better than most gluten-having cupcakes I’ve tasted from world-famous bakeries (looking at YOU, Magnolia!).

Must Know:  They’re Gluten-Free!  Go forth and spread the word!  But they aren’t vegan, so you know, don’t share.

Costs:  Here’s the really crazy part:  a box of four cupcakes is $3.99.  $3.99 = $1 per cupcake.  As a New Yorker, I sort of take for granted that cupcakes – SINGLE cupcakes – cost at least $4.00 apiece.  Again – looking at you, Magnolia.  So here’s what you do:  buy a bunch.  Open them.  Eat some.  Put the rest into a plain white box, tie it with ribbon, and tell everyone they came from a super underground bakery on the Upper West Side.  I’ll keep your secret…in exchange for a cupcake.