Skip to content
Welcome to another installment of my conflicting feelings towards the newest run of Batgirl.  My feelings continue to be all over the map.  With issue #35, I had a strange apathy towards the comic.  I wasn’t sure whether or not to like it.  When I heard buzz that issue #36 was “even better,” I knew I had to give Burnside Babs another chance.

At the beginning, she really had me: 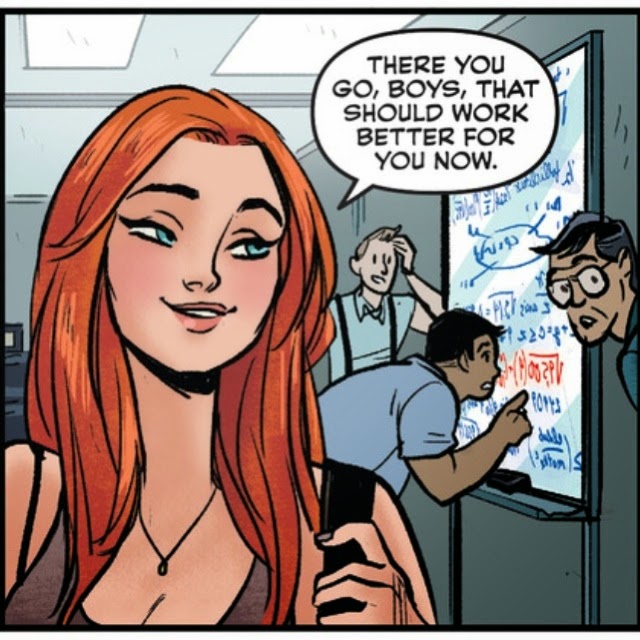 Striding through her university, she licks her finger and corrects an equation on a wipe-board.  A classic trick in many movies, TV shows, and comics to show an outsider beating “genius” at their own game.  A little cliche, but executed very well here.  Babs Tarr’s art continues to win me over.  There is so much expression, such realism, and such inimitable style – look at the smug in Barbara Gordon’s eyes! 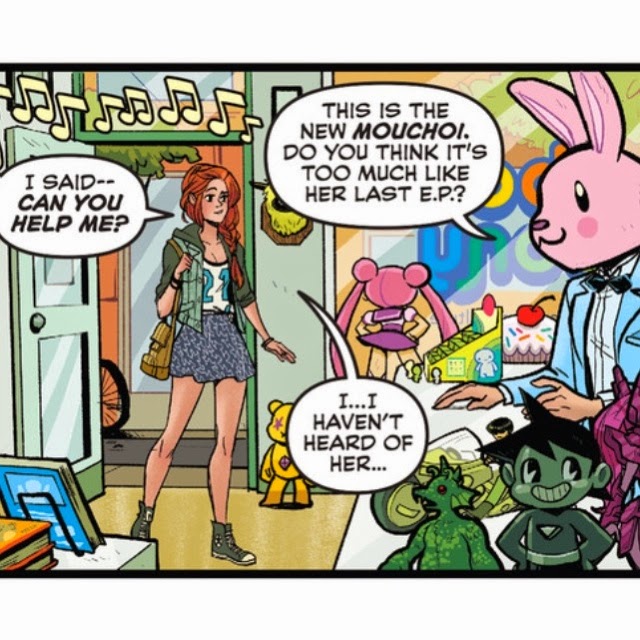 There is also a really wonderful sense here that Barbara Gordon is a girl just like you!  In a lot of female-driven comics, you can never hope to be, say, Wonder Woman, for example, or Supergirl.  But Barbara Gordon, from her messy side-braid down to her Chuck Taylor All-Stars, feels like she could be you…or your friend…and even more so when you find out her childhood affinity for a female-driven Anime!  In the previous issue, we saw a silouette of Usagi and Tuxedo Mask in the background.  This issue, the “hidden Sailor Moon” isn’t so hidden.  But I hope that she’ll continue to surface in other future issues!

The main story arc sets up an interesting “villain” – at the end of issue #35, we learned that someone sent an anonymous text to Barbara Gordon, insinuating that her secret identity was known.  Here, it appears that theme will continue to manifest itself with minor baddies being thrown at Batgirl bearing some personal tie.  This installment, the commissioner’s daughter battles a pair of bikers ripped from an anime she was obsessed with as a child!  No spoilers, but let’s say, the battle sequence was GREAT.  I wish I could show you visuals from it, but they would be MAJOR spoilers.

And then…we get this. 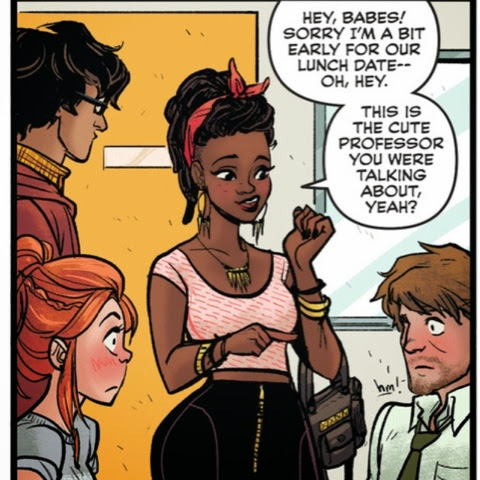 Sigh.  Barbara Gordon’s roommate unwittingly outing her crush on the hawt prof at skewl.  Oh gawd.  The next panel shows her shrugging in classic sitcom style and saying something generic like “Hey, what’d I say?” while Babs and HawtProf blush to death under her.  It’s cute.  TOO cute.  WAY too cute for someone who just had a biker showdown.

I have so many feelings.  I want to continue the story, but I still don’t know if I’m pursuing it because I want it to get less cliche for Barbara, or because I genuinely like it.  I love the diverse cast of characters, and I love that Babs is being humanized as a somewhat geeky super-gal…but, I also worry that it’s all a bit pandering.  The fact that the female representation in comics has always been problematic sets the characters LIKE Batgirl up on a pedestal that we can never seem to be fully happy with.  It is too serious?  Too funny?  Too preachy?  not feminist enough?  On the other hand, Does it NEED to be?  Must every female superhero become a porcelain pony that we can’t tolerate anything less than perfection from?  In trying to please everybody, certainly, there are people who will still find fault.  So, it’s a decent comic.  Does it have to be more?  What do you think so far?