So apparently, I started this little blog FIVE YEARS ago!  Woohoo!  Originally, my posts were short (like tweets) but now they’re…um…less so?  And it may interest you to know that when I first started this blog, I loved to rhyme.  So for my blog’s fifth birthday, I would like to regale you with three of my old poems concerning various subway encounters (like ya do) starting with the oldest ditty, originally published on August 29, 2009:

Downtown bound West 4th Street Platform,
You pushed me on the side-slash/arm.
I saw the cops, but they didn’t see
You randomly assaulting me.
Were you rushing for the train?
Or angry because you’re insane?
The train doors shut, and, with a sneer,
You shouted obscenities so all could hear,
Pulled up your shorts and glared around
As the train continued downtown.
For no matter what you may have done,
The 8th Avenue Local waits for noone.

This next poem was inspired by one of those classic “WTF?” New York moments, originally published on May 9th, 2011: 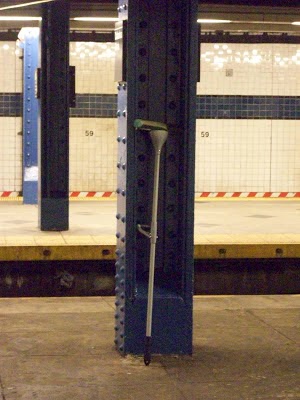 Dear Lonely Mop,
Where the hell you from?
Are you trying to reach
The Downtown 1?

Dear Lonely Mop
Wherefore art thou?
And how long have you
Been hiding out?

Dear Lonely Mop,
So stealth! So cool!
I’ll keep doin’ me
And you keep doin’ you.

And lastly, my habit of creeping on strangers on the train extends even to rhyme, as we see in this untitled piece, originally published on July 2, 2011:
Blonde hair
Dark roots
Sweatpants in summer
Ugg boots

Thanks for letting me survive for 5 years.  Please don’t put me on GOMI for this.