I’m sure you’ve all seen this quote before: 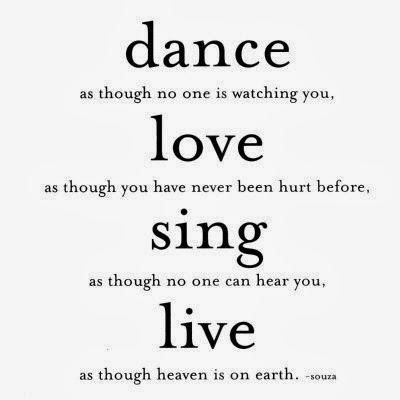 I know I’ve seen this quote a bunch and I always dismissed it as being a little bit insipid.  Oh yeah, live life with abandon, blah blah blah.  Of course, now I appreciate the last line a little more as an Atheist.

It’s the second line that’s been giving me the most trouble lately.  “…love as though you have never been hurt before…”  What does that mean?  Well, at first glance I suppose it means to remain open-hearted, to not be jaded.  But that’s so hard.

That totally flies in the face of loving as though you have never been hurt before.  Are you supposed to toss these valuable lessons about guarding your heart and treating everyone as though they might someday hurt you right out the window?  What was all that painful “learning from our mistakes” for, then?  Insanity, they say, is defined by doing the same thing over and over and expecting a different result.  To love as though we have never been hurt before?  That’s insane!

But put the shoe on the other foot.  We all want to believe we are deserving of love, and trust, and a clean slate in relationships.  Haven’t we all dated someone who was so jaded that they couldn’t trust, even when they were given every reason to?  It’s unfair to hold your past baggage against somebody in the present.  Hell, even prisoners get parole.  And there’s a third famous quote I’d going to introduce to the counterpoint:  “If at first you don’t succeed, try and try again.”  Fall off the horse?  Get back on.  Okay, but maybe we don’t trust the horse that much this time.

Deep breath.  Back in the saddle.  Giddy-up.