One of my favourite things to do on my long walks up Broadway is to spy on people eating in restaurants.  I adore Broadway from 72nd to 116th Streets, it’s like a whole world unto itself, and the variety of eateries therein is vast and fascinating.  There are solemn, polite patrons of Sushi establishments.  There are solitary diners poring over newspapers in casual diners.  And there are animated groups of friends swilling alcohol and chatting loudly in the gastropubs. 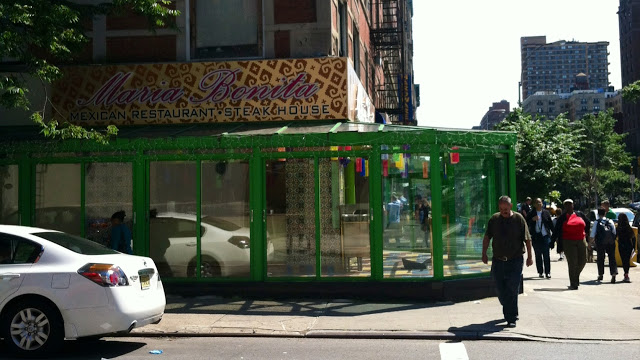 Walking up the street, one could not miss Maria Bonita.  Colorful strings of lights haphazardly adorned the windows.  The tables always crowded with boisterous customers.  Waiters brightly clad, ushering steaming plates of fajitas to the table and, on the odd night, a mariachi band scooting their way betwixt the cramped-together tables, strumming loud music to drown out the laughter and conversation.

Maria Bonita captured my imagination.  I vowed one day to visit, to join the ranks of those whom I admired, and to feast on the foods whose tempting smells wafted out onto the street where I passed.

Alas, this will never be. 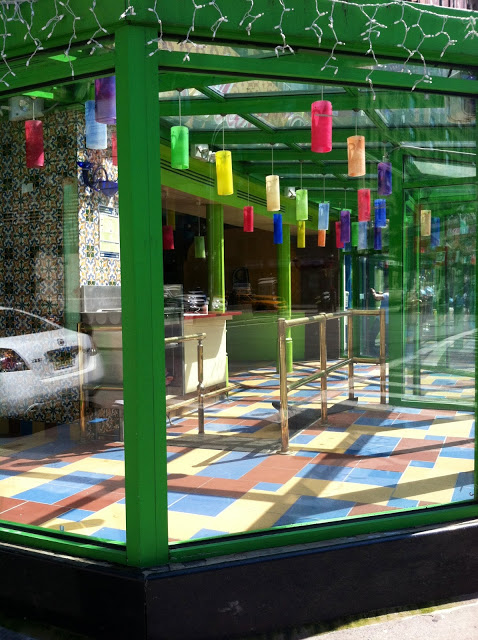 Maria Bonita is finito.  I walked past the other day to find it empty, gone, without explanation or notice.  Nothing but phantoms of the past nights of jubilation and the memories remained.

In The Colossus of New York, Colson Whitehead says:

“Our old buildings still stand because we saw them,
moved in and out of their long shadows,
were lucky enough to know them for a time.
They are part of the city we carry around.”

Maria Bonita, I never got to know you.  But I know you nonetheless.  You became part of my landscape, and you reinforced a harsh lesson.  Never delay, never wait for the right moment.  The right moment could disappear before it ever comes.  Every moment is the right moment.  Gracias, Maria.

LAST WORD:
In two weeks, Google Reader goes Bye-Bye!
I don’t want to see this beautiful thing end, and neither do you.
Let’s try to make it work, baby, we can beat the odds!
Follow me on Bloglovin’!
Just click this link!  It’s easy!