I think I have a bit of a “Hero Complex.”

Last week at work, near closing time, a young teenaged girl approached me with wet eyelashes and red nose, asking if anyone had turned in a white iPhone.  Instead of just telling her “no, none such phone has been turned in,” I led her around the store asking other shoppers if they’d seen it, crawling under displays to see if it had fallen behind anything, asking myself, “Why am I doing this?”

Yes, I wanted to return her phone to her.  I wanted to believe that a girl could set her iPhone down for a minute and look back to find it NOT stolen, simply fallen behind a rack of merchandise. But more than that…

I wanted her to look at me with glistening eyes, filled now with delight and wonder instead of sadness and hopelessness, be overcome with gratitude and thank me for finding her lost iPhone.  I wanted my coworkers to mutter among themselves about the improbability of a lost iPhone turning up and how I defied the odds to save the day.  I wanted them to jokingly call me a “hero.”

So when I accidentally used my friend’s train ticket as a perfume tester and disposed of it in the used tester strip bin, I knew I had to go back and right my wrong: 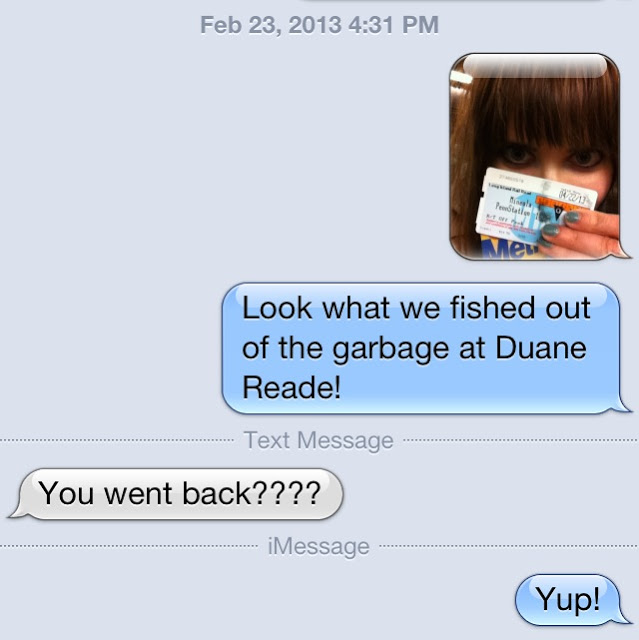 Who does that?  Triumphantly photograph themselves with a Metrocard and train ticket from the trash (which, admittedly, still smelled like sandalwood and cinnamon buns) and announce their victory?  I am a horrible, selfish human being.

I had to right my wrongs.  Selflessly.  The world needs a selfless hero and luckily, an opportunity arose in the most likely of all places:  the 1 train.

Another savvy straphanger noticed a credit card lying on the floor of the train, and asked a nearby passenger if it was his.  No, it wasn’t, he replied.  Indeed, none of the passengers on the train claimed ownership of the card.  The doors opened, people got off, people got on, and again, the credit card was pointed out.  “No, it’s not mine, is it yours?”  “No, it’s not mine.”  “It’s been there for a while, it doesn’t belong to anybody.”

I addressed the woman who initially pointed out the card:  “If it doesn’t belong to anybody on this train, I’m going to take it to the station manager at the next stop.”  I left the train and the station, passing through the turnstiles and up to the booth at 42nd Street:

“Hi, hello, I just found this credit card on the Downtown 1 train and it didn’t belong to anybody there.  Can I turn this in to you?”

“Yup,” was the unenthusiastic response, and the Booth Man snatched the card through the small slot at the bottom of his glass window.

I paused, expecting accolades and gratitude.

“Okay, thanks, have a nice day,” I lobbed through the speaker, then turned to pass back through the turnstiles and continue on my journey.

I’ll never know if that card reached its owner.  I’ll never know if he missed it, or needed it, or had thrown it away on the floor carelessly because it was worthless and expired  and even if it was valuable to him and he managed to get it back, he’ll never know that it was I who sent it on its journey back to him.