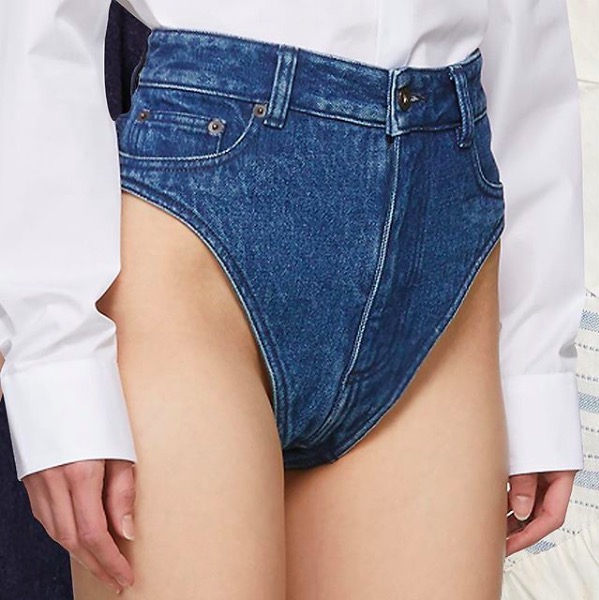 godDAMN, there is nothing I love more than petulant absurdity.

But I didn’t love THIS: Last month, believe it or not, a grown woman wrote an OpEd to the formerly-respected publication The Washington Post to beg — okay, sit down, take a deep breath, drink a glass of water, because the second part of this sentence is going to knock the wind out of you and add three new crows’ feet to your face:

An adult woman (in America) wrote an OpEd to beg adult female (specifically female) students at Notre Dame University (a college for education) to not wear leggings, lest her Catholic adult sons become aware of their colleagues’ bottom-halves.

Yeah. This adult women reacted to someone else’s clothing choices — which are, A of all, NONE OF HER BUSINESS ANYWAY — as though they were going commando in the kind of crotchless chaps-leggings that they proudly sell in the windows of Xcellent DVD in Chelsea, which I walk past almost every time I go grocery shopping at Trader Joe’s a couple of blocks away. AH, OLD NEW YORK! Which isn’t the reality of leggings.

I have to own the fact that I’ve not always been #TeamLeggings. I wore leggings A LOT as a child — probably TOO MUCH, but I grew up in the age of stirrup pants, whaddaya want! Until sixth grade, I basically wore cotton shorts in the extreme hot of summer, sweatpants in the extreme cold of winter, and stirrup-pant leggings for most of the time in between. “Graduating” to jeans was a BiG DEAL, I remember loathing them because of their relative constrictiveness, but succumbing to them because the embarrassment of puberty turned me into a MONSTER. Listen, this is the period of time when I was SO INSECURE ABOUT MY OWN BODY that I wore a windbreaker 24/7 for an entire year, lest anyone know I had clothes on UNDER MY COAT.

But I never really enjoyed wearing leggings again. For some reason, the exact features that other people deem “comfortable” about leggings make them abhorrent to me: the elastic waistband cuts into my flesh! The crotch is always problematic: they either ride up, or droop down! I’m “too tall” for leggings, so my ankles are always cold unless I pull some leg warmers up over them, and while I’m not opposed to that look, I always feel more constricted in leggings than I do in a nice pair of jeans.

HOWEVER: I FULLY STAND BY ANYONE ELSE’S DECISION TO WEAR LEGGINGS IF THEY WANNA.

Notre Dame Anti-Leggings Mom, you can GO SUCK AN EGG. Preferably, one of those plastic eggs that panty hose come packaged in, when you buy them in the drugstore. Suck that plastic hosiery egg, and meditate on the difference in sheerness between panty hose and leggings which differentiates them.

Because, we have to move on. to JANTIES.

I thought Janties were a joke. Maybe they are? Maybe they aren’t! But I love them. Because every once in a while, a new fashion trend comes out that makes all the Notre Dame Moms of the world clutch their pearls, and forces The Internet as a whole to form An Opinion about them. Most of the time, this means We All Hate It! Remember “male rompers“? Remember those clear plastic pants? Somebody pushes the boundaries of fashion, and the fingers of a thousand opinionated bloggers and Twitter-ers take flight!!! All of the opinions just POUR out into the Internet, like the spout that fills Scrooge McDuck’s swimming pool full of gold coins from the intro to Duck Tales.

These opinions range from the baseless off-the-top opinion: “They’re ugly!” To some pretty thoughtful criticisms: “A zipper fly on tight high-waisted jeans without something in between will probably be uncomfortable.” There is, of course, a fairly heated discussion surrounding the question of whether they’re meant to be work as underwear, or can stand alone on their own as pants.

I rear my head back and laugh the wild laugh of a jackal, of a woman driven to madness by the fierce policing of how she is allowed to present her body in public.

I have to point out now, that it seems to me, that “janties” and “leggings” are the opposites of each other. The yin and yang to each other. Consider this.

Leggings cover the legs entirely, but are frequently decried as being “not pants” because they do not have the traditional pockets and fly coverage to obscure the butt and crotch.

Janties are ONLY pockets-and-zipper-fly-crotch coverage, and leave maximum leg exposed.

I think the fact that we live in a world where both “leggings” and “janties” exist and both are arguably pants but neither are arguably pants is just a tiny part of the problem which is this: Sexual Panic. Yes, the same sexual panic around bicycles and telephones. The “PROBLEM” with both janties and leggings is DO THEY COVER WOMEN UP ENOUGH FOR SOCIETY?! And the answer is obviously no, nothing “covers women up enough“, it’s never enough, no choice in between total nudity and full coverage will ever satisfy ALL critics, you can never win.

You wear leggings and janties?

Have you considered wearing Janties over your leggings? Remember that late-Aughts trend of ripped Daisy Dukes over black leggings? Well? Has enough time passed to bring that back? Or better yet —

Wear your Janties UNDER your leggings!!! I mean, the panic of leggings is the fear that the person wearing them isn’t wearing any underwear, right? And the fear of knowing that there exists only a layer of poly-cotton blend between your personhood and that person’s naked flesh? CLEARLY the solution is to wear JEANS-UNDERWEAR under your spandex Leggings!! This way, the outline of the stitching and the flap of the fly will let EVERYONE know that YES YOU ARE WEARING PANTS, you’re wearing PANTS under your PANTS, you’ve gone almost as far as you possibly can to assuage any panic over the proximity of your genitals, you’re wearing twice as pants as normal pants!

And remember: YOU CAN NEVER WIN!