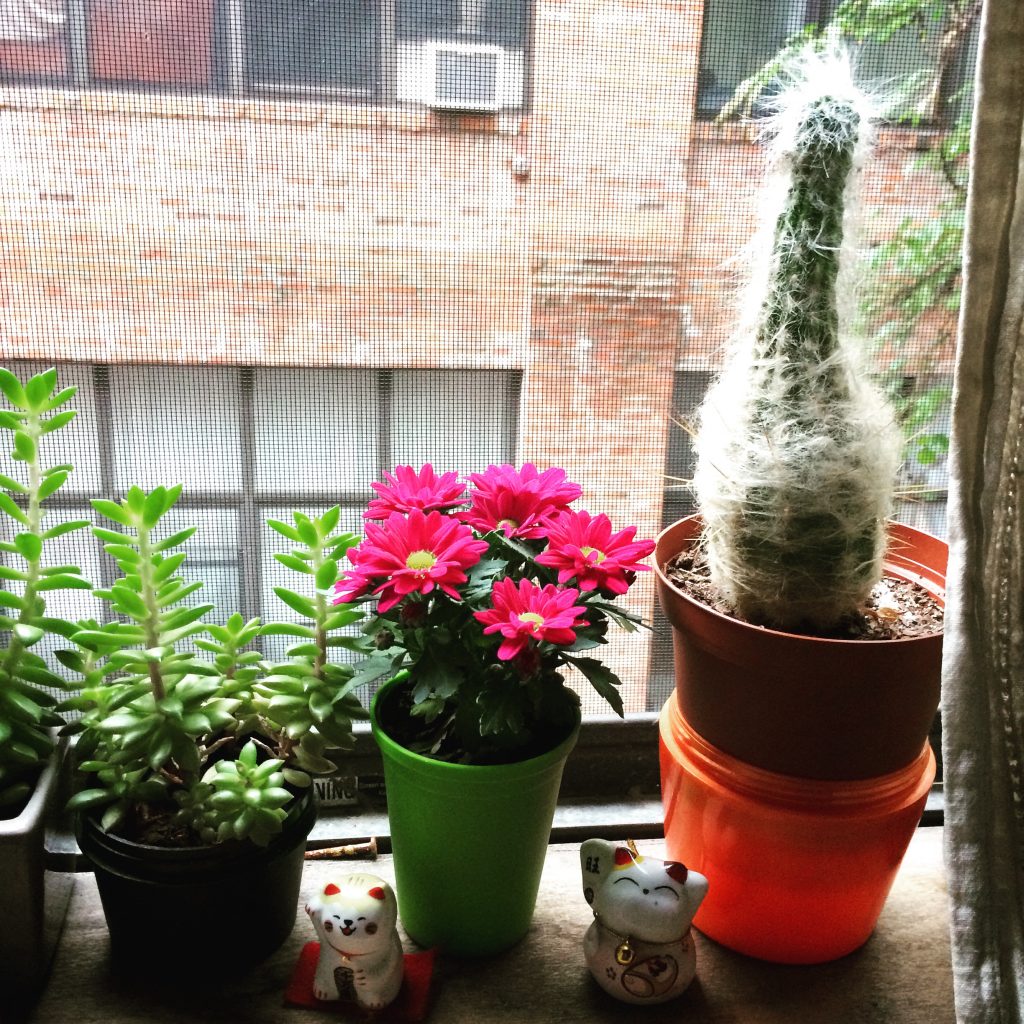 As you know, it was recently MY BIRTHDAY*

*yes, it was like, a week and a half ago, but to me, a birthday is more like a state of mind! And when I decide I want special treatment, it’s My Birthday.

So, I was still in a Birthday State of Mind when I was shopping for much-needed groceries at Trader Joe’s when I decided that I was going to buy myself a new plant.

In my adult years, I’ve really come into the green thumb that I believe I inherited from my mom, who received hers from my grandfather (her father). Grandpa’s summer garden was legendary. His tomato plants would grow to be taller than he was, and he was tall! My mom still grows her own vegetables, and is famous for resurrecting other people’s dead houseplants. We’re good at gardening.

I mean, back in 2014, I bought a cute little flower from Trader Joe’s for $1.99, and I nurtured that little plant into THREE SEPARATE 12″ tall monsters! It grew and grew and grew until I had to strap a chopstick to it to keep it standing up! To this day, I have no idea what that plant was. It looked like an innocent litte orange mum when I bought it, then suddenly it morphed into a tall woody stalk with thick, waxy leaves? Kind of the plant equivalent of bringing home a baby lizard from the pet store and watching it rapidly grow into a 6-foot alligator.

I was feeling festive and frivolous and looking at the succulent selection at my favorite Trader Joe’s, next to someone about my age who appeared to be doing the same thing. My bedroom has a wide windowsill that is crowded dense with succulents, I have very good luck raising them. They’ve grown big and tall, and though they’re asses to elbows on my sill already, I decided that I had room on my windowsill — and in my heart — for one more.

So I asked the picky stranger beside me, who was lifting them up and scrutinizing each one, what exactly they were looking for. I confessed that, though I own many succulents myself (all of which, I may point out, were propagated myself from a single plant, applause applause, thank you) I was still somewhat a novice when it came to choosing a good one.

“You don’t want a tall one,” they informed me. “If they’re getting ‘leggy,’ they’re not getting enough light.

*insert the sound on my brain exploding, and my entire sense of self being sucked into the vacuum it created*

Friendos, I   AM  DEVASTATED.

Here I thought that my tall, ambitious succulent babies were grow, grow, growing healthy and strong! I watered them and turned them and pinned all my parental hopes and dreams on them! I had been assuming that my vertically gifted succubabies were growing into fine little upstanding leaders of the community, and had hoped one day they’d receive a lucrative athletic scholarship to Succulent College!

When all this time, in reality, they’d been reaching for the light.

So I bought the nondescript mum-looking flower instead.