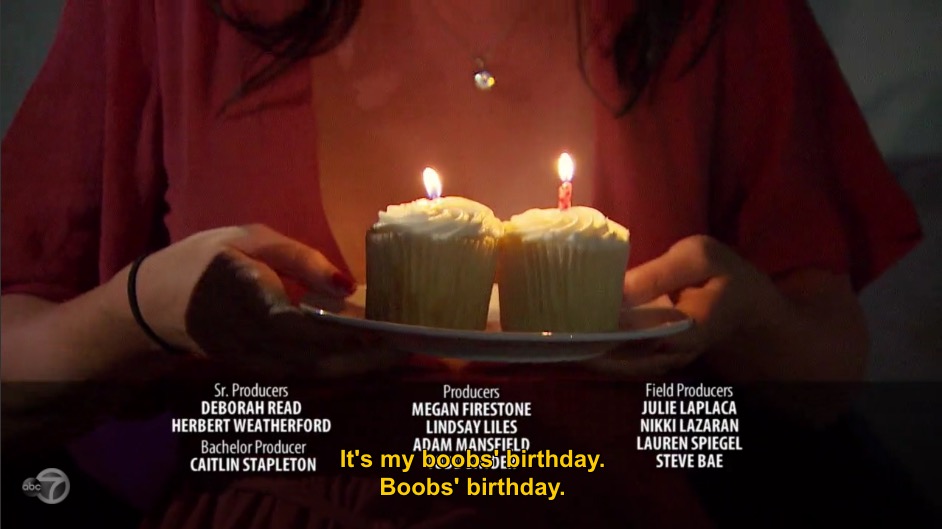 Let’s be honest: The Bachelor is a long show where not much actually happens.

Each episode is approximately two hours long, and until the point where we can list all the contestants off the top of our head, we don’t really care what happens. So it becomes necessary to pad out the episode. In this case, with boobs.

Corrine’s boobs, to be precise. Corrine took her top off as part of a photo shoot that already involved topless modeling. First of all, A PHOTO SHOOT? Who does a photo shoot for a first date?! I mean, have ya heard of BOWLING? Especially awkward because he actually sent the professional model home after the first rose ceremony, so like, now it’s basically awkward school picture day with bridal attire. But anyway. 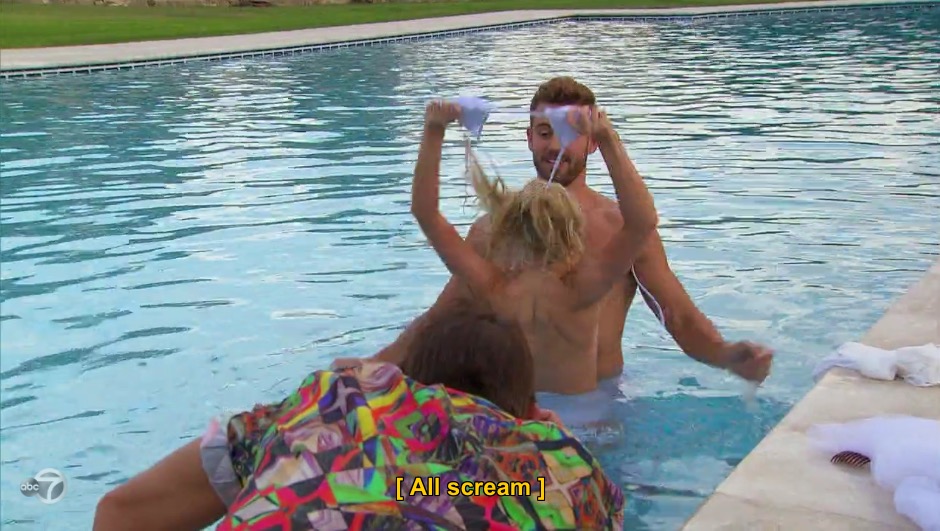 I know I’ve given myself permission to hate Corrine because she said the phrase “good body” which UGH is such a fucking body shaming bullshit phrase, but I can’t bring myself to hate her in this episode. Because literally every other girl hates her? And I love to root for an underdog? Corrine is just playing the game and YEAH, it’s not apparently kosher to interrupt other girls for more time as often as she did — and I maintain that after the fourth time, she didn’t really want more time with Nick, she was just asserting her dominance over the other women.

Well, this episode was really about two things: Corrine’s boobs… AND LIZ! Who slept with Nick at Jade & Tanner’s Wedding!

While I’ve eased up on Corrine, the person I now love to hate is Liz. By the way, did you know that Liz slept with Nick at Jade & Tanner’s Wedding??? 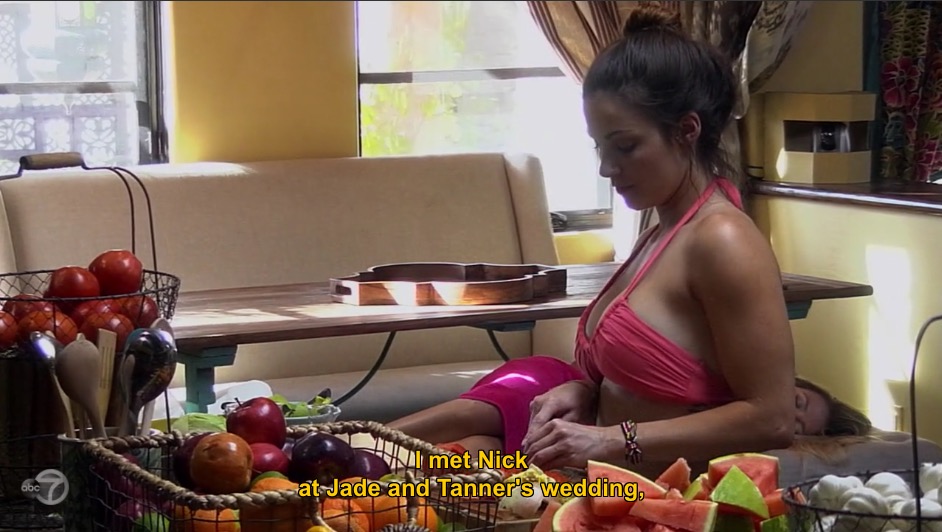 Yeah, I know, editing can make anyone look like a villain, but based on the little we see of Liz, I just have to imagine that her life around the mansion consists of shit like this:

Liz: So is anyone here a football fan, and did anyone sleep with Nick at Jade & Tanner’s Wedding? Who like the Packers, ladies?

Liz: I’m going to the kitchen, does anyone want anything? Juice? Sandwich? Sleep with Nick at Jade & Tanner’s Wedding?

Liz: Hey ladies, I was just thinking, wouldn’t it be so weird if one of us had already slept with Nick at Jade & Tanner’s Wedding? 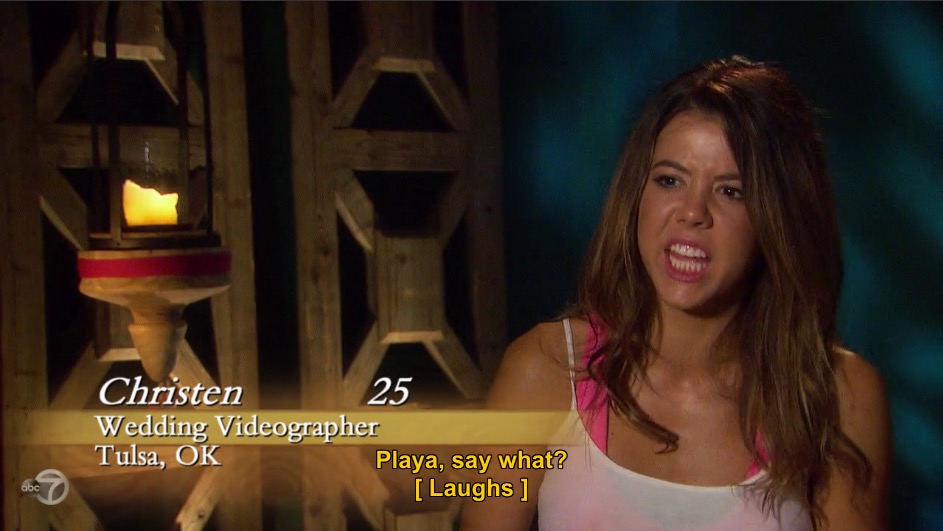 Liz finally breaks and tells Christen her secret, placing such a burden on this poor woman’s shoulders that she nearly melts down during their group date to the Breakup Museum — shockingly, STILL a less awkward choice for a first date than a topless photo shoot? — as Liz painfully describes her entire relationship with Nick to the group and Nick tries to avoid eye contact at all costs: 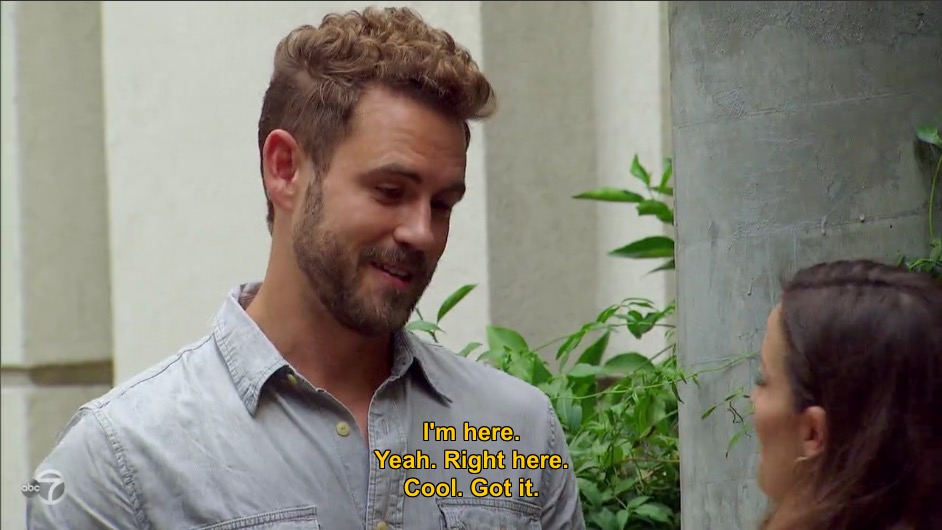 Uh but guess what? Her plan to humiliate the truth out of Nick in front of all of the other women …works? Nick sends her home and the episode ends on a cliffhanger, right after Nick tells the girls why he sent Liz home and what they did at Jade & Tanner’s Wedding…

And from the looks of tonight’s episode, the Bachelorettes aren’t too pleased with this deception. In fact, I don’t think I’ve seen so many shocked women crying in one place since the election night coverage…damn it, Meghan, I told you it was too soon for that joke!!

A couple other things happened that aren’t really worth mentioning. Nick had his first 1-on-1 date with Danielle M, who was my pick to win from the first episode, and I’m just not sure I’m shipping them anymore. I also realized that I’m rooting for Josephine because she reminds me of Starbuck aka Kara Thrace from the Battlestar Galactica reboot. And Alexis aka Shark Girl celebrated her one-year breast implants anniversary, which only made me like her more, because she pulls no punches and she’s fun to hang out with, even if her cupcakes were disgusting. Shark Girl, keep bein’ real! 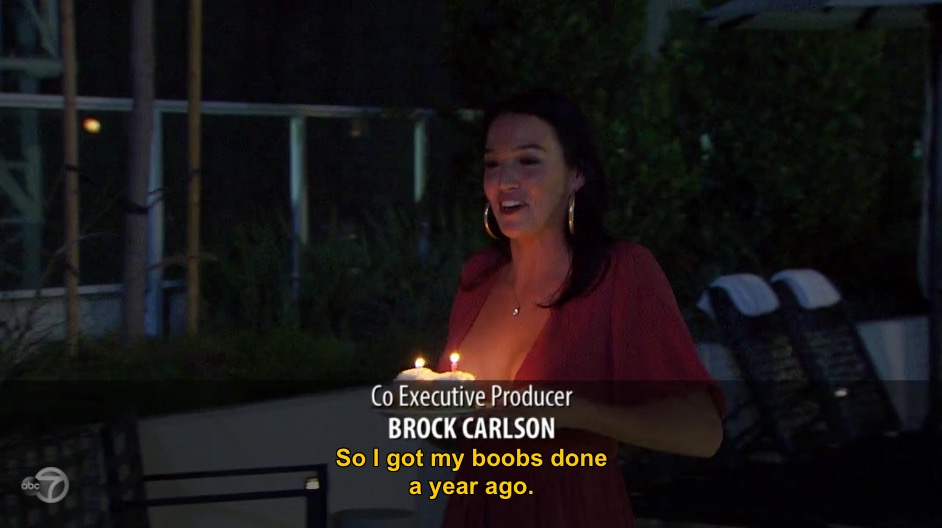