ARGH I’m probably going to piss a lot of people off by saying this, but please, bear with me.

This whole “Hashtag-Pray-For-Somewhere” shit has GOTTEN OUT OF HAND.

So it used to be, back in The Day (which was like, a year ago? Two years ago?), when a catastrophe happened somewhere, you’d “Hashtag-Pray-For-Them.” #PrayForSandyHook. #PrayForBelgium. Okay. I mean, I’m a pretty lapsed Catholic, but the last time I prayed, I thought it was supposed to be a private conversation between you & God, and that was supposed to be personal and secret. But then again, the last time I prayed, it was Christmas Eve mass, 2010, and I was mostly just screaming silently in my head at God for taking my friend away from me, but, you know, whatever. That’s personal.

I don’t know what “Hashtag-Pray-For-Wherever” is supposed to do. I mean, if you’re praying for someone, doesn’t God know? Or is God on the Twitter now, and he only blesses those hashtags that are trending? “Hmm, I see a few people are Hashtag-Praying-For-Syria, but not nearly as many as people who are taking Hashtag-Selfies-For-Seb, so I guess I’ll just let the Syrian refugees continue to suffer. Anyway, who is this ‘Seb’ guy?”

But that’s not why I’m beside myself today. No, not because Hashtag-Prayers-For-Whomever have become a public performance of pretending to care, but because the hashtags and profile filters have morphed into an ugly attempt to shame people into performing religion. I’m exasperated because I saw THIS: 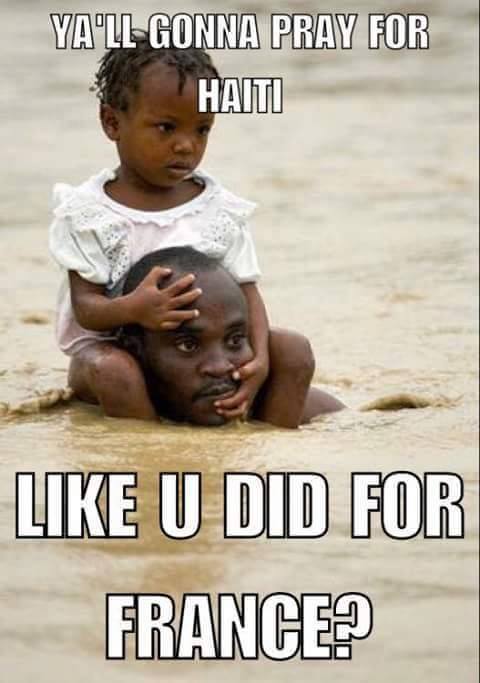 DISCLAIMER – I acknowledge that Not All Prayer Hashtags Are Created Equal. For my own part, and based on the posts I’ve seen on my own timeline, I have seen an outpouring of #PrayForHaiti and #PrayForFlorida and #PrayForEverything. Neffer Kerr over at Ebony raises a very good point about the lack of a “Pray for Haiti” Facebook profile picture filter. Yes, Kerr is absolutely right on every count, you should definitely read that article and share it everywhere. Yep, it’s fucked up. It’s racist. It’s elitist. It’s bullshit. Why are some disasters deserving of special filters and other’s aren’t? That shit is fucked. HOWEVER — —

The filter on your profile picture won’t actually do anything. Unlike donating blood, seeking out local charities to help those afflicted, doing research into how to help recover from the disaster without damaging the local economy, or lobbying for more money in the federal budget to be allocated to disaster prevention and relief. Things that take time. Things that take care. Things that take sacrifice.

You complain about #SocialJusticeWarriors? Well, I’m throwing it back to #PrayerJusticeWarriors. The same folks who share memes that demand you to “LIKE this post you care about sick babies and animals, SHARE this or else you’re completely heartless!!! <3” Maybe I’m completely out of line, tell me if I am! As an atheist, I don’t actually pray for anybody, so maybe I have no business commenting on the whole “prayer” business. I just think maybe, like, it’s none of your business who people are praying for. Or if they’re praying at all.

I know I wouldn’t want anybody to tell me who I should pray for. So much for “freedom of religion.” I guess what I’m trying to say is, Don’t tell people who to “Hashtag-Pray-For.” Don’t shame people into #Praying at all. Don’t start a Holier-then-thou-War over Facebook memes. As Matthew 6:5 says, “And when you pray, do not be like the hypocrites, for they love to pray standing in the synagogues and on the street corners to be seen by others.” And as I am told Belinda Carlisle says, “Ooh, Heaven is a place on Earth.” Let’s focus on how we can actually help and let people decide how they want to pray in their own way. Am I alone here? Is anyone else out there getting “Hashtag-Prayer-Shamed”???