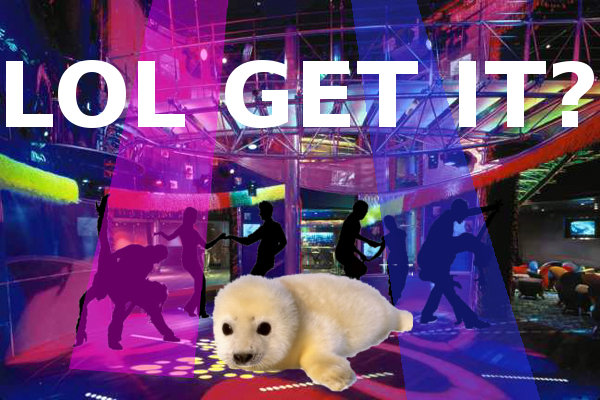 Remember the past version of “me” who wanted to be more open to new experiences?

So, I never really did the “club scene.” Aside from Trivia Night and later, Karaoke Night, I never set foot in a bar without a purpose. Mostly because I was the one with a van, therefore Designate Driver 4 Lyfe, and I hate(d) the taste of beer anyway, so why go? Unless you’re going to need me to answer obscure questions about Carrie’s boyfriends on Sex and the City or belt out the female part to “Paradise By The Dashboard Light,” my services are not required anywhere near a bar. But feel free to call and wake me up if you need a ride home, though!

Somehow or another I made it to 30 without having gone to a CLUB. In fact, I didn’t even really know what a CLUB was, so here’s a handy guide for you (and past me, one I nail that slippery ‘time travel’ concept):

Ta-da! So you see, it would be very easy for me to “NOPE” out of the clubbing experience because, honestly, it sucks. It’s like hanging out in a construction site that serves alcohol. There’s a loud monotonous droning noise and I’m in everyone’s way. I could go on and on, but instead, here’s My Seven-Point Thesis On Why I Hate Clubbing:

1.  It’s Late And I’m Old And Therefore Tired. None of these parties even start before my bedtime. I’m already yawning and rubbing my eyes, and we’re only in line to get our hands stamped. If I’m drinking after midnight, I’m going to be asleep in the cab on the way home in half an hour. There is nothing fun about being tired, in my opinion. My vision starts tunneling, little things irritate me… basically, I’m a toddler who needs to be carried to bed sternly. I get grumpy, I start acting mean, and I regret it the next morning! But in the moment, I’m tired and I want to be tucked in for the night!

2.  I Have Nothing To Wear. The last two times I’ve gone to a club or rave, the theme was always some variation of cyberpunk or neon or silver jumpsuits. Everyone’s really excited about getting all dressed up for this! Meanwhile, I’m having a panic attack, cancelling my plans for the day to dig through the box of clothes I never managed to go donate to the consignment shop (or go shopping for a new outfit!) to find something to wear to this idiotic party. Oh, I have costumes! I have velvet ballgowns, and unicorn pajamas, tutus and poodle skirts and studded vests with spikes! I love dressing up. If the club theme was “Stevie Nicks night” or “In-costume cast party for community theatre production of Godspell night,” I would be SO READY. I would dress YOU up.

3.  We Have Nothing To Say To Each Other. Literally the only reason I’ve gone to any clubs is because friends were there. I’m going to show moral support for your choice to go clubbing. I’m basically the mom in the bleachers of your karate tournament, with glow sticks. I’m going to hang out with you, but…I can’t ACTUALLY hang out with you, because we can’t talk to each other! Here’s an alternative: if you want to gather a bunch of your friends together but not say a word to them for two hours, why not invite a group of people to see the new Ghostbusters movie? At least then we can sit down in an air conditioned room, instead of huddling in a crowded corner, unable to speak to one another. And then, we’d be supporting women in film! Huff.

4.  The Music Sucks. Why, with the entire recorded history of music to draw upon, would you play THAT? It sounds like a modem trying to connect (like I already said, I’M OLD). How can you even dance to that? It lacks soul! Given a choice, I would actually prefer the DJ put on that scratchy ‘square dance’ record we were forced to shuffle through do-si-do’s to in fifth grade gym class. As a matter of fact, I did go to a contradance in college, and was lifted off the ground by a man old enough to be my grandfather, and it was incredible. I am capable of fun, people! But there’s a word for dispassionately waving your limbs around while shifting your weight from one foot to the other simply because you’re in a room full of people doing it, and it isn’t “dancing.” It’s “Aerobics class.”

5.  Where Did All These People Come From? On any given Friday night, the population of New York City is close to 8 million people, and somehow, they all decided to come to the same club as me. Are there NO maximum occupancy rules for these places? That doesn’t seem safe at all! I feel like I spend more time on the dance floor moving out of the way for people to squeeze past me than I do actually dancing (which is fine because, as we’ve established, I don’t know how to dance to the sounds of robots fornicating like they’re about to be destroyed by a meteor). All night long there’s random hands on my back, people stepping on my feet, something lifting my skirt up and ringing my ‘personal space’ alarm bells. Look, I don’t recreationally ride the E train at rush hour, I don’t enjoy being squished into a throng of pushing people for fun. I like my personal space, dammit!

6.  Drunk Strangers Are Not Fun. Maybe it’s a throwback to my days as designated driver, but all those drunk people in one place makes me nervous. SOMEBODY’S GOING TO GET HURT. And even if you make it home safe, you’re going to have a hangover! Sister, are you telling me someone handed you a pill, and you JUST TOOK IT?!? I can’t relax and have fun at clubs because I’m living in the “before opening credits roll” moments of an episode of Law & Order: SVU.

7.  Pressure To Perform. Okay maybe this is just me, but I feel enormous pressure to act like I’m having a good time at a club. I mean, just because I’m not having a good time, doesn’t mean I don’t want other people to have a good time! I’m not “yucking your yum,” this is not for me. So I feel like I have to act like it’s all great. Luckily, I am a trained actress! I have been trained to look like I’m listening. It goes like this: shocked face, agreeing face, raise eyebrow, nod knowingly, repeat. Then if I’m compelled to dance to music I don’t like, I go through the motions of the physical warmups we used to do in movement classes. Wow, I look like I’m dancing, aren’t I? NOPE, I’m not participating in this experience AT ALL. Mentally, I’m wondering if it’s too soon to leave without looking like an asshole and scanning everyone’s faces to make sure they’re buying the act. Ugh. Exhausting.

Look, I get it. It’s trendy to hate on the club scene. I swear to you, I have tried. I’ve given it a good faith effort and danced to the music and had a drink and tried to enjoy it. Maybe you do enjoy it, and that’s fine! Maybe you feel relaxed buffeted by the backs of sweating strangers as you air-hump to the dulcet tones of car alarms and thumping syncopated back beats. Yeah, maybe I come across as judgey here, but I’ve never enjoyed being in a club for more than an hour! I’ve held up my end of the bargain: I gave it a shot. Look, I love my club-going friends. I love dancing. I love drinking overpriced cocktails in a warehouse decorated with Christmas lights. It’s just that clubbing is not for me. But by all means, Baby Seals…party on.