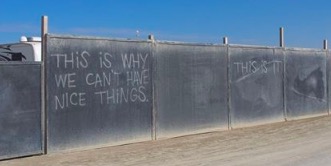 I was raised on a couple of “Golden Rule”s. “Silence is Golden!” “Do Unto Others As You Would Have Them Do Unto You,” and “If You Can’t Say Something Nice, Don’t Say Anything At All.”

Today, it seems these old platitudes have modern twists. FUN!

but most of all,

“If You Can’t Say Something Nice, Write It On The Internet.”

I was a young teen in 1998 when I got my first screen name and AOL account. Unbeknownst to my parents, I would lurk in open chatrooms after school while eating string cheese and watching Maury. Conversations flowed haphazardly as folks slipped in and out at random. It was a gentler, kinder Internet, where we gave each other the benefit of the doubt that our chatting partners were telling the truth when we asked them: “a/s/l?”

The comments section of any article is not so much an exchange of ideas related to the topic of the piece anymore. It has become more like a free-for-all of hatred being flung at the author like so much “mystery meat” in a cafeteria food fight. If we can learn to filter our vitriol and only comment when it is necessary, I believe it will go a long way to making the Internet a better place.

Because the Internet IS our world now. It’s long past time for us to sober up and quit pretending that the Internet is some fantasy alternate universe that beeps into our living rooms through a dotty old modem, as in our youth. We can no longer shrug and say “Get over it, it’s just the Internet” when our industries, economies, jobs and safety depend on the Internet. Our hobbies, our relationships, our bank information, our unflattering vacation photos are all on the Internet, so why wouldn’t we treat it like it matters?

I was raised on something else, too. Maybe you’ve heard of “constructive criticism.” Hey, that’s what this is! I’m not just blithely bitching into the black hole of the Blogosphere, I really believe in this. Let’s continue to comment, to voice our dissent, to state our opinions, but learn to do so in such a way that doesn’t disrespect others and actually serves to help find a solution.

Isn’t it better to say “no comment” than to say “lol this is dumb”?

In closing, a parable about Burning Man. I went to Burning Man horrified at the prospect of using only port-a-potties for over a week. My prior life experience with port-a-potties was that they stunk, and that very little effort was made on the part of other port-a-potty users to get their waste materials in the designated area, if you catch my drift. What I mean is, PISS AND SHIT EVERYWHERE, that’s what I’m talking about. And yet, even at the end of nine days’ use, the port-a-potties at Burning Man were pleasant and clean as possible. Well, if you have to come back to the same port-a-potty over and over again, you don’t want to trash it, because you’re the one who suffers in the end! Everyone had a personal interest in making the port-a-potties as pleasant as possible, and in trying to keep it nice for themselves, the result was that everyone had the best possible experience in the port-a-potties.

The Internet is like a port-a-potty. Let’s all keep our shit as nice as possible, okay?