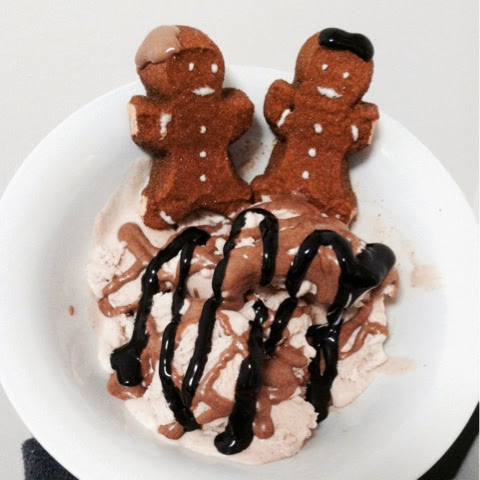 I call this sundae, “Gluten-Free To Be You And Me.”

For my second experiment with homemade ice cream, I wanted to make a coffee ice cream that would taste like the flavoured coffee I loved getting from Tom’s.  I used half a batch of ice cream base, plus 1/2oz of cold brew coffee concentrate, roughly 2.5 Tablespoons of cinnamon and a dash each of nutmeg and allspice.

The result?  Tastes a lot like Cinnamon Toast Crunch.  If I were to attempt this again, I would add MORE coffee to the mixture!  I might also fold in some raisins and try to add a swirl of peanut butter as well.  Dare we fly that close to the sun?  Not with the ice cream in your hands.  It would melt.

I topped him off with two gingerbread Peeps and a drizzle of Hershey’s Special Dark syrup (ON SALE OH YES) and melted down some Brunette spread from Le Pain Quotidien.  That stuff is the bee’s knees.  Next time you pass a LPQ, BUY SOME.  It hardened into a shell on the ice cream and was a fantastic nutty addition to the sundae!

I can’t wait to experiment with fancier – and weirder! – flavors in the future!  What would YOU try?  Any suggestions?