I’ve alluded here before to the fact that I’m nearly 29 and have never been to a rock concert.  Pause to grasp that, moving on.

Last week I attended not ONE, but TWO LIVE ROCK SHOWS in 48 hours’ time.  WHAT!

First, I went to a place called The Canal Roomto see the music video premiere party for my friend’s band, She Said Fire.  Big open space, a sort of raised area with seats in the back, and bathrooms down on the lower floor with individual stalls (to prevent shenanigans?) with sexy cool dim lighting and black toilets.  I took a selfie.  I looked pretty rock and roll, if I do say so myself: 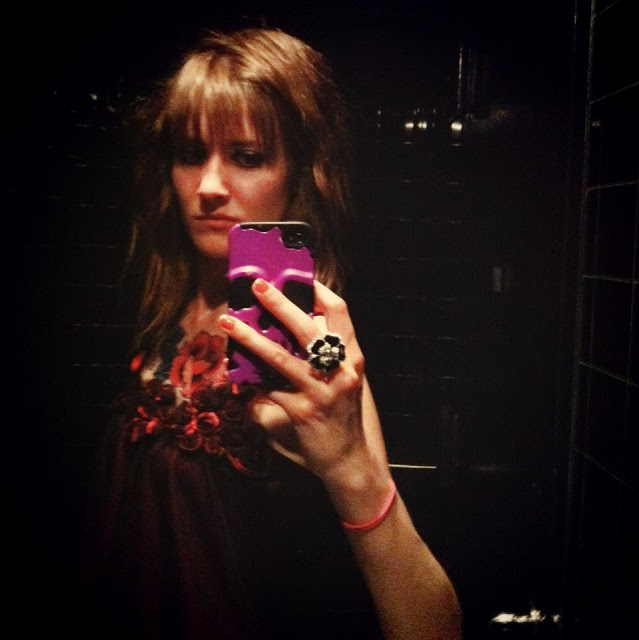 So there I am…early to the rock show, I don’t really know anyone, everyone there is with a group of friends and oh yeah THERE’S LOUD MUSIC PLAYING.  How the hell do you mingle at these things?  I can barely understand what’s being shouted in my ear, how will anyone appreciate the subtle nuances of my wit?  Am I supposed to dance?  There’s a girl dancing, but I think she’s drunk.  So I basically stood bopping to the music in the back.  It was cool.  The band played a cover of “Take On Me” and I sang along.  The lighting was super awesome and neat. 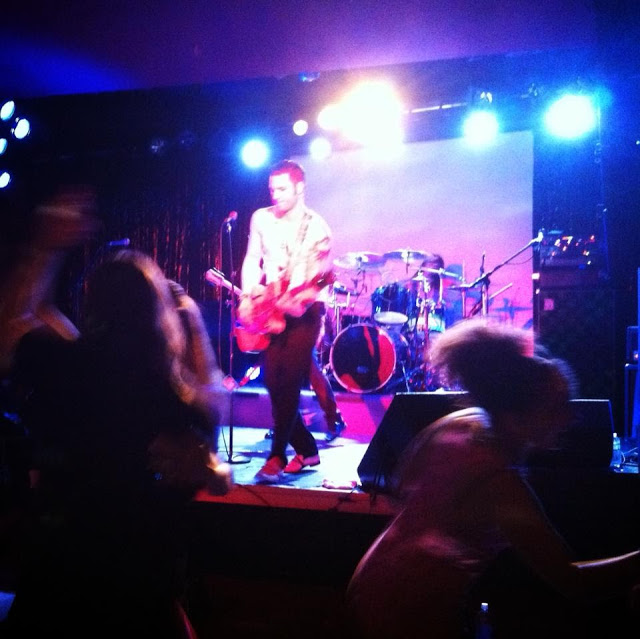 I moved up to the front when my friend’s band came on.  I knew those guys!  There they were!  Playing music!  People dancing!  Songs I knew the words to!  Suddenly I felt comfortable!  This is a weird, shared experience – like being on a train where everyone’s headphones sync up playing the same music and we all just decide to enjoy it together?  I don’t know.  I’m new at this, guys. 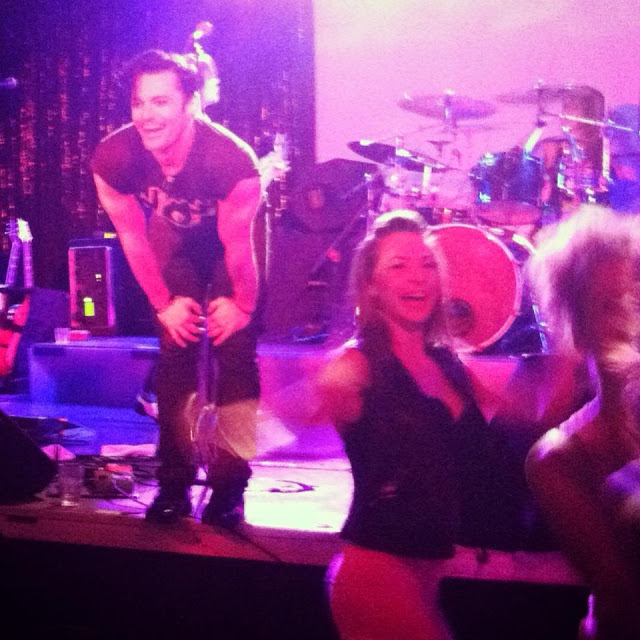 The next night, my evening plans got cancelled and a series of friends scored me a free ticket to see Courtney Love.  COURTNEY LOVE.  A day before, I attended my first concert.  And now I was seeing Courtney Love.  That’s like going from zero to coke habit OVERNIGHT. 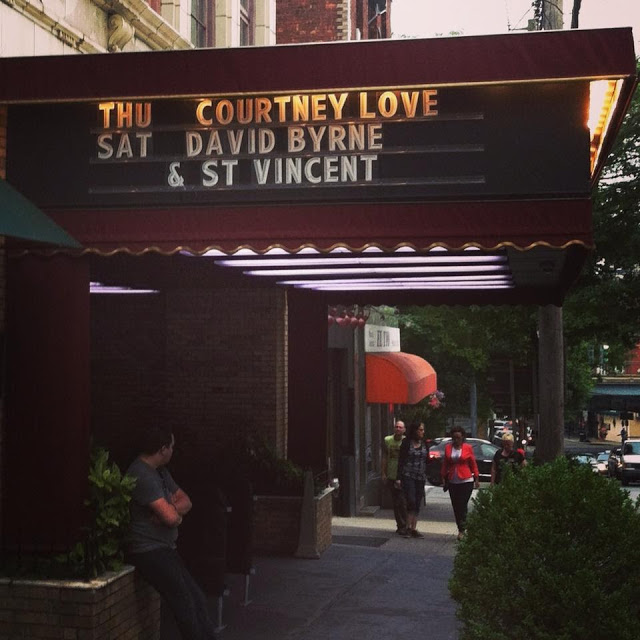 What’s up with the lighting at these things?  It’s insane!  I knew a guy who did lighting for concerts, I thought, “huh, neat, you flip a switch.”  But NO!  The lighting is like a movie that plays underscoring the music!  It’s fantastic!  But it does make it super hard to get clear good photos. 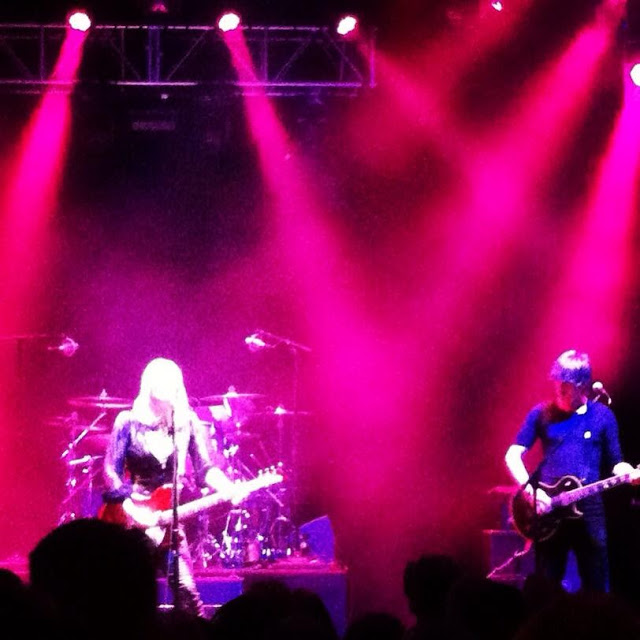 Remember the time Courtney Love sang “Celebrity Skin” and then stalked offstage demanding loud enough applause to merit an encore and returned 20 minutes later in a white lace dress and started pelting the audience with rose petals?  Now I can say I DO!  I was so close to the stage, I got smacked with a fistful of petals.  But not close enough to take a decent photo.  IRONY! 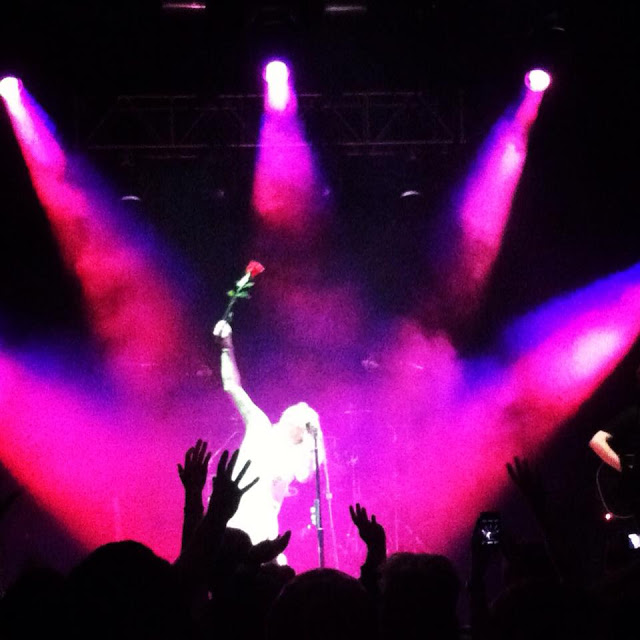 I have to say, I was impressed.  I guess I had this image in my head of concerts being these big, scary, formal things where you’re nudged into uncomfortable seats in the back of a huge stadium, pushed around by cantankerous fans, and groped by strangers in a mosh pit.  None of this happened to me, in fact, it was all very friendly, and it felt very intimate!  In a good way!  And I’m not just talking about when the closing act of the Canal Room performance approached me randomly TWICE, gave me a smooch on the cheek and grabbed my bum.  Twice.  Talk about intimate.

So needless to say, I Love Rock and Roll.