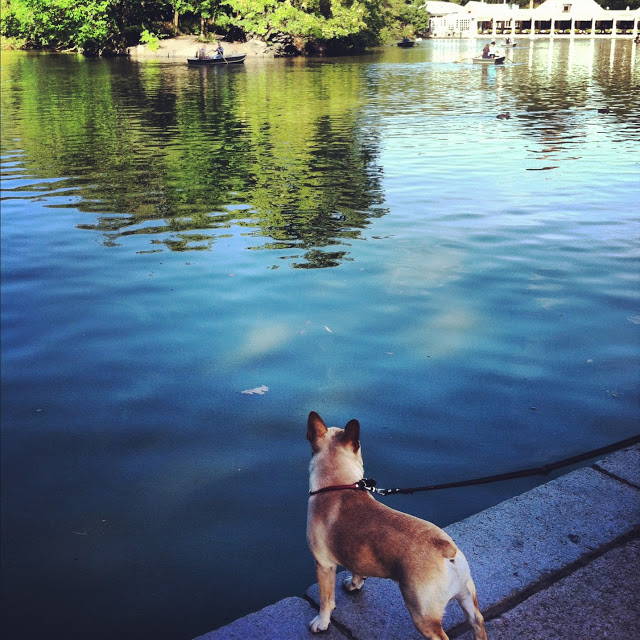 During my walk through Central Park yesterday on a rare afternoon (ish) off, I was feeling brave and free.  I had one hour to stroll to my tea-date with my roommate, and only the slightest idea where I was going in the park.  I emerged onto a familiar landmark and saw, to my delight, a guitar/cello* combo playing.

And ERMAHGERD you guys the cello* player was gorgeous.  Curly blond hair peeking out from under a fedora, Ray Ban sunglasses, an ironic T-shirt tucked into ironically high-waisted pleated pants held up with suspenders.  Ironic hipster jackpot.

My sunglass gaze caught his sunglass gaze.  I slowed my roll and his head turned to follow me.  My head flashed an ingenious plan:
I would pull a dollar from my wallet and write a message on it:
“Oh hai foxy cello* player!  My name is Meghan.  555-555-5555.”

Then, I would toss it into the guitar case with the tips.  Crazy!  Insane!  Genius!

Instead, the cute cello* player and I held our gaze as I walked away, tossing my hair over my shoulders and feeling the early autumn sun burn my cheeks.

Over tea, I told my roomie about my crazy plan.  Later, I asked to borrow a pen to sign my paycheck to deposit it in the ATM.  And guess what?  She didn’t have a pen either!

“Oh, how will we ever nab street-musician husbands if we don’t carry pens with us?”  I lamented.

Later, on the subway ride home, I pondered random encounters and fate.

“I can’t stop thinking about the butterfly effect,”  I confessed.  “If I had had a pen, the course of my life could have been completely different.”

“Or, it could have stayed exactly the same,”  my wise roommate reasoned.

“True.  But then, I wouldn’t have had to borrow a pen from the restaurant to sign my paycheck.”

The moral of the story is, always carry a pen.

*  in the end, it turned out for the better that I didn’t write this message on the bill, because the hot cello player I was lusting after turned out, after several hours’ contemplation, to be playing an upright bass.  And when hitting on street musicians, it’s probably a good idea to be able to correctly identify their instruments.