Now, several weeks ago, our water was shut off for over 24 hours (off completely – no toilets flushing, no dishes washed, and NO SHOWERS) and we received no notice other than a sign tacked on our front door, totally in Spanish, hinting at some emergency and apologetically communicating “no agua,” upon which some elitist jerk had scrawled “What does this mean in English?” (to which I put to you, Elitist Jerk, what educated, cosmopolitan New Yorker doesn’t know Spanish?  Or at least can glean some Romance language translation using their Latin education?  Hmmm?).

This must have caused someone to re-evaluate the whole means of communication, because the other day, I found this sign on our door: 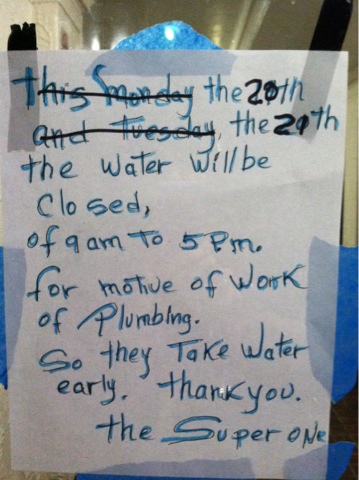 This.  Changes.  Everything.  Now we know what’s going on with our water, and it’s even better than I could have hoped.  Take a look at the last few lines there.  “They,” whom I can only assume are some sort of aliens, robots, or reptilian sewer people, have been taking our water.  Early, as the sign would indicate.  And on the human side, we have a hero, The Super One, who is motivated to take BACK our water for the good of the complex.  I say BRAVO, Super One.  Keep up the good work (of plumbing).