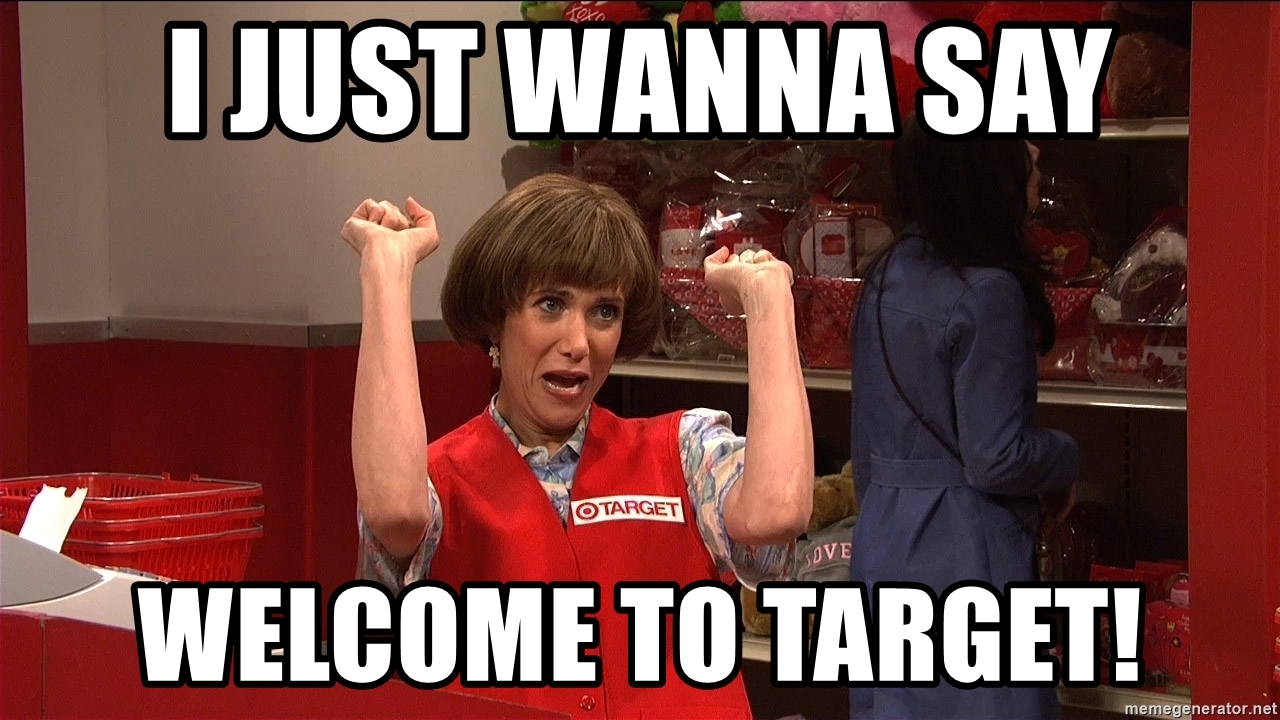 It started so small, as it always does, and just got out of hand from there — yeah we’re talking about Target.

Which kind of feels like gilding the lily on what is already my favorite suburban shopping destination. There’s something familiar and soothing about a trip to Target: from the $3 deals right inside the door, to the seasonal holiday delights allll the way in the back. There’s a reason why so many “Went to Target for 3 things, spent $100” memes exist. Target is fabulous.

The decision to sell vibrators in stores is fascinating to me because, if you’re familiar with Target store policies, you already know that Target is pretty choosy when it comes to their merchandise.  Target stopped selling tobacco products in 1996, and although they say this was an money-saving decision, it hasn’t stopped them from riding a moral high horse about caring for their customers’ health. Target also stopped selling realistic toy guns in the early 90’s. Target caved to petitions to remove Grand Theft Auto V from their shelves in 2014 due to the violence against women. And finally, Target ceased selling Confederate flags in stores in 2015, ostensibly to celebrate the 150th Anniversary of the Confederate flag becoming completely fucking obsolete. All of this only further endears me to my favorite big-box store. TARGET: Where You Can’t Buy A Gun Or A Confederate Flag, But You CAN Buy A Waterproof Rechargeable Dual Vibrating Massager for $29.99! Target is clearly on the side of the angels.

Target is also pretty progressive. Everyone remembers the furore in 2016, when Target announced their trans-inclusive bathroom policy. At a time when many “bathroom bills” were sparking controversy in Congress, Target made headlines for declaring that their customers were encouraged to use the bathrooms and fitting rooms that best befit their gender identity. Target took a lot of heat for coming down vocally on the side of trans rights, but they didn’t back down, and we loved them for it. Hell, for years, we’ve been buying Target-branded PRIDE merchandise. Obviously, this is a savvy economic decision, and all corporate involvement in celebrating Pride is opportunistic, but DAMN it’s nice to be able to buy a full-sized rainbow flag at the same store and in the same manner that you buy your American flag for Fourth of July. Recognizing the importance of Pride normalizes it, and mainstreams gay culture, which I kind of love! Taking another unpopular stance, Target also prohibits customers from bringing firearms inside the store, asking concealed carry permit holders not to bring their weapons on the premises. All of these actions have drawn criticism from conservative customers, who threaten to boycott and even spread rumors that Target had stopped selling (Christian) Bibles in stores. And frankly? The fact that intolerant, transphobic gun nuts hate Target — only makes me love it more! Target won’t sell you a Confederate flag, but they WILL sell you a rainbow one, and they don’t give a fuck where you pee as long as you don’t have a gun! AND DID I MENTION THEY SELL VIBRATORS, TOO!?

Knowing all of this (and I hope you do appreciate the amount of Target knowledge, research, and citation of sources that I just dropped on you), it should probably come as no surprise to you that the Target *ahem* target demographic is liberal, intersectional feminists. People who shop there because of their strict anti-violence, pro-LGBTQ policies, and not just because there’s literally a Starbucks in the front of many of their stores. Everybody knows this. Now, it’s definitely worth noting that Target has struggled in the clothing department, trying and failing to deliver on the promise of a plus-size range to rival their other successful clothing brand collaborations (Mossimo, anyone?), but let’s be honest: Target’s clothing lines have never *really* succeeded at anything beyond knit basics and slouchy cardigans, anyway. To their credit, this seems to be something they’re working on — and maybe they’ll hit it! Their designer store brands are hit and miss, anyway. I haven’t gotten excited about the clothing aisles since Alexander McQueen.

Target’s real appeal is its aspirational lifestyle. You can grab a Frappucino and a red cart at the front door, and push through aisles and aisles of fantasy. The home decor is chic and bountiful — wouldn’t it be nice to have another throw pillow on my sofa? The kitchen aisles with shining appliances and tools — wouldn’t you like to be the kind of person who cooks more? Seasonal decor — you know I really ought to entertaaain… the possibilities are endless, and that’s why the cart fills up — it’s so easy to get swept up in the Target Fantasy of an effortlessly perfect life.

So of course vibrators are right on Target (zing!). What is Target if not the brick-and-mortar embodiment of the “treat yourself” motto. It’s the reason behind the memes! “Went to Target for trash bags and Goldfish crackers, spent $100!” It’s not that we need Target. It’s that we deserve Target! We deserve their store-brand pumpkin spice coffee grounds (try them, seriously, you won’t be disappointed!). We deserve scented tea lights and sock-monkey onesies. We deserve collaborations with reality TV celebrities, and Archer Farms off-brand-but-just-as-good snacks, and to decorate year-round with the velvet skull we bought when Halloween merchandise hits the shelves in mid-August! We deserve the sleek design, USB-charging capabilities and 10 vibration settings of the plusOne Waterproof Rechargeable Vibrating Bullet! At a competitive low price, but of course. If Target aims to please, this’ll sure hit the bullseye. *Samantha Jones wink*