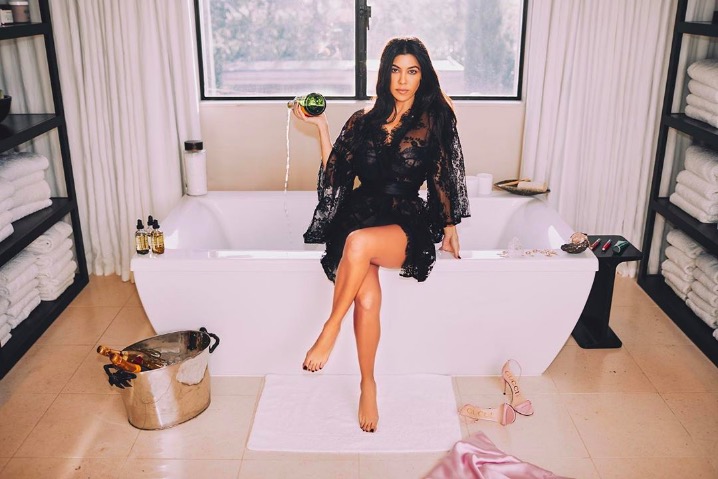 It’s soooo easy to make fun of Gwyneth Paltrow and GOOP. Soo easy. TOO easy! It’s almost boring! Goop has been around since September 2008, and at this point, it’s almost impossible to poke fun at or parody the concept without instantly becoming a hackneyed, tired cliché.

As far as the absurdity that is 2019 goes, of course Kourtney Kardashian has her own lifestyle… brand…? And its name is something cutesy that’s almost onomatopoeia but not quite? That’s 2019, but we’re gonna party like it’s 2009, what is time, is it linear, I don’t know anymore? LOL.

I just gotta say, I’ve stopped keeping up with the Kardashians. Nothing against them, it’s purely a numbers game at this point. They were easier to keep up with before the Jenner sisters came of age and Kim started amassing children. The sheer AMOUNT of Kardashians to keep up with has doubled, if not TRIPLED, since the show debuted in 2007! I keep *trying* to keep up with the Kardashians, but I keep getting overwhelmed! I feel like I touch base every once in a while, but we’ve drifted too far apart to be really considered “keeping up” with what they’re doing.

Without being mean, I have to say that Kourtney isn’t in the top 3 of Kardashians whose lifestyle-brand-aspirational-living-website I’d read. I’d sooner follow a website authored by Khloe Kardashian, with listicles such as “10 Unique Baby Girl Names That Subtly Say I KNOW WHAT YOU DID, TRISTAN!!!” Or a Kris Jenner vehicle with sex advice columns like, “How To Get HIM Off Like He Got OJ Off!” I honestly have zero interest in parenting content, but considering the kind of April Fool’s prank North and Saint coerced Kim into playing on Kanye (tl;dr, it involves faking her death), I’d be mildly interested to see how the taciturn Kim raises two such macabre toddlers. But… Kourtney? Really? Kourtney?

I will say, I am endlessly fascinated by what other people’s lives are like. Of all the things I remember about the last season of KUWTK that I was able to actually complete, only one thing sticks out in my mind: the salads! THE SALADS! The salads. In nearly every episode, there is at least one scene where one or more of the Kardashians/and/or/Jenners sits at someone’s dining table and eats what appears to be a takeout deli salad. The SALADS! That’s how you know they’re rich!

For those of you who don’t recognize and fixate on the salads eaten on KUWTK, a chopped salad of the kind they are eating — the kind that comes in a big plastic bowl, where you choose the base and the mix-ins and the dressing — is the most frivolous and horrible expense of the wealthy, at least in New York. These kinds of salads never taste good, and rarely cost LESS than $15. Fifteen dollars, FYI, is the cost of an entree at a moderately-priced restaurant, and you’re paying MORE than that for an apathetically-tossed salad comprised of limp lettuce and slimy toppings with cheap dressing that doesn’t taste great but they also NEVER GIVE YOU ENOUGH! These are the salads the Kardashians apparently live off of?!

But if POOSH is to be believed, Kourtney has her own *signature* salad recipe and I don’t think I can adequately prepare you for this, so brace yourself. Are you ready?

I’m not really in a position to criticize someone else’s depression meals, but NO WONDER THE KARDASHIANS ARE PAYING $15 FOR SHITTY TAKEOUT SALADS! This is Kourtney’s SIGNATURE salad! Not her “BASIC” salad! Not her “EASY” salad! Not her “4-INGREDIENT MEAL” SALAD! A “Signature” salad implies you’re PROUD of it! “Mmm this salad is so good, I’m gonna put my SIGNATURE on it!” A salad so good, it bears your AUTOGRAPH?! Is eggs? And avocado? And tomato? SHE OCCASIONALLY OMITS THE CHEESE TO BE DAIRY-FREE! That takes this salad down to 3 ingredients!!

I glimpsed through the main page to see what kind of articles we could expect, and it’s pretty much the exact same genre of crap we see from pretty much every single other “lifestyle” blog spearheaded by some über-rich celebrity-turned-influencer:

Which in itself is disappointing! Like, it’s your lifestyle brand, it should reflect your lifestyle! What is the Kourtney Kardashian lifestyle? Is it really just “being small of stature, heavily policing food, owning beige furniture”? Is certainly does seem like that based on the 15 seasons of the show… I mean, the humongous decorative cookie jars that nobody’s allowed to eat from? Kourtney is absolutely the killjoy of the Kardashian klan.

MINIMALISM! BEIGE FURNITURE! WAIST-SHRINKING! TIME-SAVING! SIMPLICITY! NEUTRALS! The infuriating sameness of it all! That’s your personal taste? FINE! But why does every rich white woman celebrity with a lifestyle brand push the exact same agenda of smoothies (chewing is too extravagant!) and camel turtlenecks (blend into the beige furniture and disappear!).

I just want. ONE. Rich white celebrity. To start a lifestyle brand that’s different! To have a house full of RICH COLORS, a wardrobe of AVANT-GARDE FASHION, recipes for FLAVORFUL FOOD! Like, get CREATIVE with your wealth and influence! You seriously want me to believe that you spend THOUSANDS of money on hard-boiled eggs and wicker hampers? BO-ORING!

What happened to the glamorous excesses of the rock stars and movie stars of the 60s, 70s, and 80s? Why have we forced our aristocracy to return to a life of feigned restraint and politeness? I want my celebrity lifestyle gurus to revel in their eccentricities! I want to know all about their indulgences! I don’t want to save money, get smaller, look younger, and scale back — I want a celebrity lifestyle brand to pull me down into the deepest, darkest caves of absurd wealth and privilege! IS THIS JUST ME?

I don’t want the Tori Spellings and Lauren Conrads of the world telling me which $60 all-natural SPF is best for my kiiiiids!!!!! Is that really the aspirational celebrity fantasy lifestyle??

I think I’m just singing the second verse of the Beverly Hillbillies song. Or maybe yearning for some bygone Lifestyles of the Rich and Famous era. Now, celebrities have to pretend to be “Just Like Us” — they eat bland and cheap food! They fret incessantly about losing their attractiveness! They helicopter-parent their brood, perched on a beige sofa in organic-cotton yoga pants and sip an herbal “superfood” tea to relax, JUST LIKE US! This completely destroys my celebrity lifestyle fantasy of sleeping ’til noon, having breakfast brought to you in bed (with a mimosa), slipping into a silk dressing gown and maribou heels and lounging by a pool until it’s time to shimmy into a gown and take your limousine to some expensive restaurant for the paparazzi to catch you on the arm of some producer…

Uh oh, my celebrity lifestyle fantasy seems to be stuck on some 50’s Hollywood ideal. But when did it all get so beige? So pure? So organic? So…. POOSH?