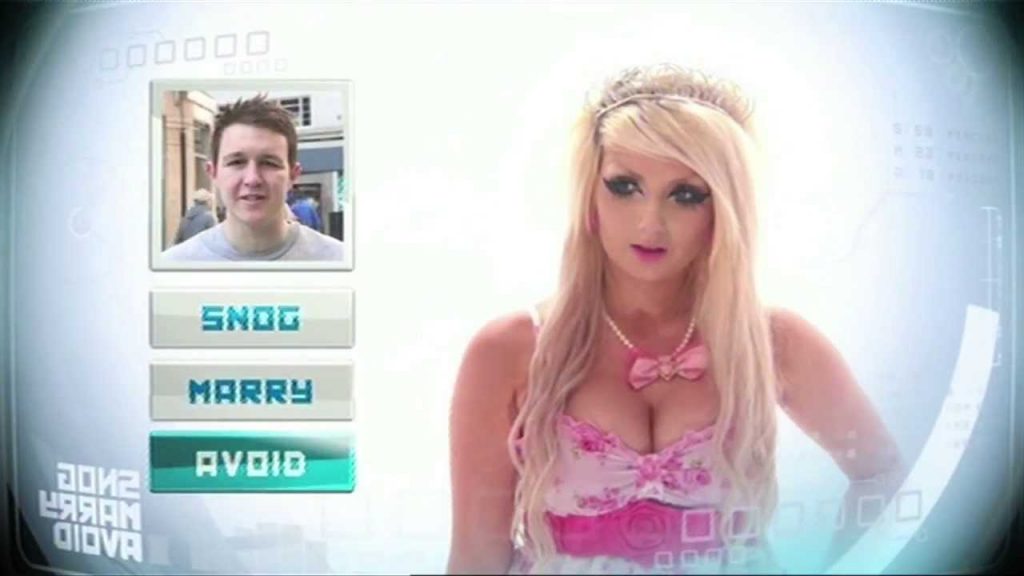 Generally speaking, I’m not a huge fan of makeover shows anyway. in the Venn Diagram of “Things I Hate” and “Things I Watch Ironically,” “Makeover Shows” stay squarely in the former category. Maybe it’s the little girl inside me, who remembers being forced to wear way-too-uncomfortable tights with dresses, who naturally recoils at the notion of anyone telling anyone else what to wear — or, in most cases, what not to wear. Queer Eye* aside, unless you’re making over a house in the extreme, I generally avoid makeover shows…

Until I fell down a YouTube rabbit hole with Snog, Marry, Avoid. Now, granted, it’s from the United Kingdom, and I guess there’s some cultural differences at work here, but I couldn’t fathom a show like this going down in New York City, where individuality is encouraged, if not necessary! I watched partly out of fascination at the gall of POD, the faceless robot who makes cutting jibes at contestants’ appearances, and carries out the “magic” of transforming the unique and creative women into dowdy librarians** devoid of personality.

First off, the entire concept of the show hinges on your attractiveness to the opposite (and very rarely, same) sex. Ostensibly, gauging your hypothetical success in your selected dating pool based on your appearance. This irks me greatly because it assumes that your fashion choices are solely dedicated to the cause of attracting yourself a mate — the same logic that is used to justify catcalling (“if you didn’t want men to comment on your looks, why would you dress that way?” um maybe because I like these clothes?) and rape culture (“if you’re wearing a tank top and short dress, you’re asking for it” or maybe you’re wearing a tank top and short dress because it’s hot outside? Or because you like those clothes? Fuck all the way off, please).

Now, I don’t want to say that people never purposefully dress in a way that they believe will make them more attractive to someone that they’re trying to attract. But I’ve been catcalled enough times in a full sweatsuit on my way to the laundromat to confirm that just because I’m wearing clothes, doesn’t mean that those clothes are trying to “snag me a man.” Sometimes, I wear clothes just because I have to, to avoid arrest. Or because I like those clothes! Personally, I dress the way I dress because I love it when small children in public spaces mistake me for a princess (a little girl in IKEA the other day told her mom I was a “fancy lady” which made my Grinch heart grow three sizes tbh). As Verena Twig puts in in her episode (above): “I do what I want, wear what I want, say what I want, whenever I want, because I don’t believe that it is doing any harm to YOU.”

Of course, the majority of the contestants on the show are female, because society’s chief priority is to police women’s self-expression. Men are seldom made over on the show, presumably because the way that they choose to present themselves in public isn’t as subject to scrutiny as the way that women interpret their own fashion choices. However, one episode that stuck in my craw was Dan. Dan wants to get a man, so right away, you’re like, “Oh great! This episode is going to be inclusive and diverse!” But it quickly became apparent that Dan’s makeover only serves to send the message that the show not only polices female self-expression, but also fragile masculinity! If a man dresses in any way that isn’t MANLY MAN MASCULINE, he’s obviously in need of a makeover!

But I have to confess, my distaste for makeover shows comes from a place of personal offense. I’m well aware that I’m a choice candidate to be made over, by their standards! Why? Because I stand out from the crowd (well, not in my own area of hipster Brooklyn, but certainly in IKEA). The whole gist of these makeover shows is to bully someone out of their own personal tastes and style and force them to conform to some arbitrary concept of conformity. It’s like that classic advice to “be yourself” but WAIT, no, not like THAT! Heaven forfend the candidate should prefer their own personal style, the show makes them out to be the villain for refusing to blend in with the other sheeple and abandon their own personal tastes. To bully someone into blending in with the crowd.

So yeah. I hate-watched my way through several episodes of this show, and then I stopped. I stopped, okay! Because I can’t find anything to enjoy about a faceless meanie tearing apart someone’s individual choices, then lassoing them into a beige wrap-dress with the promise that it’ll give random men boners, as if that’s all they care about. I’m happy that there are fewer makeover shows on TV than there were when I was a kid***, and hope to see the entire genre go the way of the brachiosaurus. If we could stop tearing down people who make bold personal style choices and shifted to celebrating everyone’s individuality, I think it would go a long way to making the world a less judgy and safer place for everyone, a place where we all feel free and encouraged to be our best selves, however we want to express that. Now that’s a makeover I can get behind.

*in Queer Eye, it seems to me that the makeover isn’t completely contingent upon making someone feel shit about their personal choices but is more often simply about giving a haircut to someone who is too apathetic to understand that they need a haircut and then they even listen to their personal preferences and aesthetic to better help them achieve the look they’re going for and then they buy them a new house anyway.

** I say this with all love: both of my parents are librarians. NO REALLY!

*** fun true story: the short-lived spinoff Queer Eye for the Straight Girl is whom taught me how to apply mascara as a wee lass.