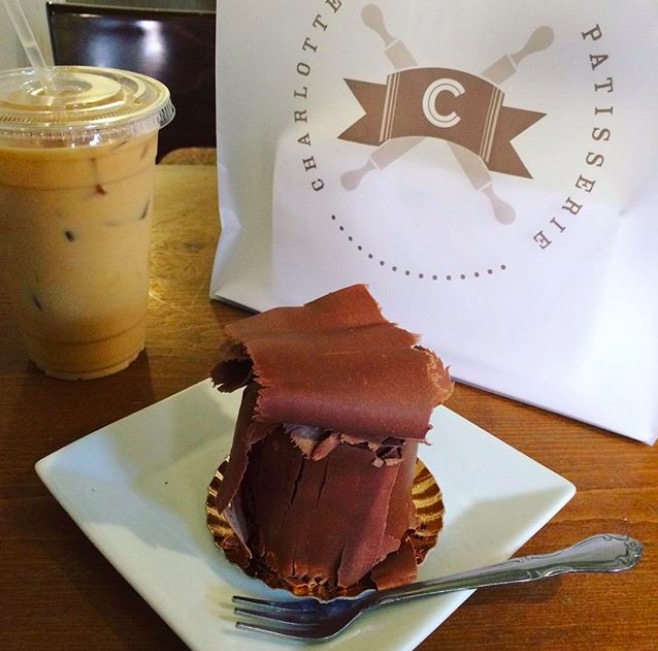 So the other day, my BGFF told me that she saw gluten digestive aid for sale. Like, pills that would help me digest gluten! Do these work? Can it be true? Yours Truly is very nearly having a B-I-R-T-H-D-A-Y, and when she blows out the candles, she’ll be wishing that it does work. That maybe, like a Fairy Godmother, the Magic Gluten Pills™ could give her one WHOLE day of feeling like a princess… with a functioning digestive system. Like some kind of Cinderella, with a functioning gut. And for those 24 magical hours, I will go balls out and eat all of these things:

There is NOTHING that can compare to the flaky, buttery layers of a fabulous croissant. Like, even a mediocre croissant! I have never seen a gluten-free croissant. I doubt they even exist. But that can’t stop me from drooling over fresh-baked horns of golden flaky deliciousness in pastry cases — or on the Great British Bake Off!

This is a deeply nostalgic fave. My grandma used to live near a Krispy Kreme, and it was tradition to buy a dozen donuts for everyone to share when visiting. HOW-EVER… we would always invariably end up fighting over the Boston Cremes! Like, begs the question: why did we not just buy a dozen Boston Cremes? Why did we buy Jelly donuts (a distant second place) or plain glazed (seriously, WHY?) when we coulda just bought A DOZEN BOSTON CREMES?!?! And now I’ll never know.

Ok, take the flaky pastry layers from the Croissant and fill it with the cream from the Boston Creme and basically, that’s a Lobster Tail. Italians call it a sfogliatella, and it’s fucking incredible. Back when I lived in Forest Hills, there was an old-school Italian bakery down on Metropolitan Ave that made these big loooong ones like, isosceles triangles of ruffled layers piped FULL of cream and dusted heavily with powdered sugar OH MY GOD. You open your mouth to take a bite, and you inhale a mouthful of that sugar and start coughing before you get to the good stuff. That’s part of the fun!

A decent gluten-free baguette DOES NOT EXIST. Consider me the Dana Scully of gluten-free baguettes: I’ll believe one exists when I see one. Until then, NO. WAY. You may think I’m picky? But honestly, I’m not! I’ll take any kind of baguette: the long, skinny one I can take bites off. The big, thick loaves I can tear into and eat the soft, chewy insides and gnaw on the thick, brown crust. It just has to be airy, doughy, and crunchy on the outside.

Do you have. ANY. IDEA. How difficult it is. To be living in the Pizza Capital of the World™ and not be able to eat any garlic knots???? My affair with garlic knots was tragically short-lived. I was introduced to them in college, when my fellow co-eds ordered the cheap, shitty college-town pizza for delivery and ordered garlic knots as a side. Most of them came from the city or Long Island, so they were well-versed in Garlic Knotting. Nothing compares to your first garlic knot! These were heavy & greasy, like super-thick soft pretzels wadded up & tied in a knot, saturated with olive oil and with garlic chunks hidden in every crevice. There’s nothing like pulling one apart, grease dripping down your fingers and the side of your hand, to expose the soft curves of dough within the knot and dip the exposed ends in the oil at the bottom of the delivery container. I also lost my virginity in college! I don’t remember that experience with nearly as much nostalgia as losing my garlic knot virginity, though.

My hometown has like…ONE nice restaurant. Okay, when I was in community college, my hometown had like A HANDFUL of nice restaurants, and in my opinion, the NICEST one was the Lost Dog Café. I only went there a handful of times, because it was too expensive for my part-time Target cashier paycheck, but every time felt like some incredibly “grown up” luxury. I had a car and a debit card, I could drive myself to this fancy restaurant whenever I wanted to! And at that time, that meant splurging on a raspberry lemonade and an appetizer of fried ravioli. YES, FRIED RAVIOLI. I know the word “fried” conjures up gross state fair imagery, but these were classy fried foods. Battered and breaded deep-fried cheese ravioli, sprinkled with parmesan and oregano, served with a creamy dill sauce for dipping. I’ve seen other fried raviolis, with the typical marinara dipping sauce, but it’s not the same. I guess nothing could ever be the same as those fried ravioli at my hometown hotspot, served with dill sauce and a side of the taste of freedom.

Non-New Yorkers, follow me on this one: the Dumpling Man was the first NYC address I ever had memorized (100 St. Marks Place). Footsteps away from my favorite neighborhood in the city (St. Marks Place), I’ve eaten at least 100 dumplings here. I mean, easily. This is a world-renowned hole-in-the-wall where the only seating is bar-style, on stools at a counter, facing a window, whereon the other side they make the dumplings. They’re steamed or fried to order, so service isn’t speedy, but it’s SO WORTH IT. No other dumplings taste like these dumplings. How can I explain…? Let’s say this: there’s more INSIDES than there is OUTSIDES. The fillings are creative, flavorful, and layered — whereas most dumplings are salty flavorless mush. The outsides are delicate and tasty, whereas most dumplings are doughy, greasy, and dry. And the DIPPING SAUCE! I could (and probably have) drink the stuff straight from the little plastic cups. Oh, these things would wreck my intestines today, but oh man, the memories.

Literally Anything From Magnolia

Ok now even you non-New Yorkers know this place. This is the cupcake shop that Carrie Bradshaw put on the map! Yeah, their cupcakes have a special place in my heart — as they do, I’m sure, for any Millennial chick who moved to NYC after seeing SATC glamorize Manhattan. Wave a chocolate or, better yet, RED VELVET with pastel frosting and a dainty sugar flower under our nose, we’re not gonna pass it up. Crumbs gave you VOLUME, Magnolia gives you class. Those in the know will tell you it’s not the cupcakes that make the trip to Magnolia worth it, though — for insiders, it’s all about that banana pudding! Come on a special day and you might be able to get a slice of Icebox Cake in the perfect-for-summer Peppermint flavor. Years ago, in my gluten-eating heydays, I had a Peppermint Icebox Cake for my birthday cake! July 31st, hot as hell, a cool and minty refrigerated treat makes the PERFECT birthday cake for me. And would AGAIN, this birthday, were it not for my stupid STOMACH!

Basically, here’s the deal: I’ve been gluten-free for like… five years now? Yeah, I feel like it’s been about five years. Pretty sure my 29th birthday was the last time I ate any gluten, and gave it up right after I went all out on cupcakes for my birthday. And it’s taken a while, and it’s been a journey, and most of the time, I don’t miss it. I’ve been able to find pretty decent substitutes for pretty much everything I need, and my digestive tract is as regular and reliable as — well, you don’t need to know about that, but let’s just say it’s GREAT.

The fact that this list is relatively short speaks volumes as to how easy it can be to give up gluten when you have access to cheap alternatives (Trader Joe’s cheap bread makes a BIG difference). And I’ve found some really good cake in this city (photo up top is from Charlotte Patisserie, I wrote about them for Brokelyn, and my favorite cake is By The Way Bakery on the Upper West Side), and the gluten-free crust from Vinnie’s Pizzeria is so doughy and authentically “New York” that it’s almost impossible to tell the difference (not to mention their “specials boreds” are punny and hilarious, which I fully support). I almost don’t miss gluten anymore, but if anyone tries this magic pill and it works, LET ME KNOW. SERIOUSLY. Especially after writing this, because I would sell my firstborn for a dozen Dumpling Man shrimp and/or veggie dumplings and two cups of dipping sauce, I swear to god. 🙂

lead image from my Instagram, from Charlotte Patisserie, which is a gluten-free cake, though you’d never guess it from how GOOD it is!!