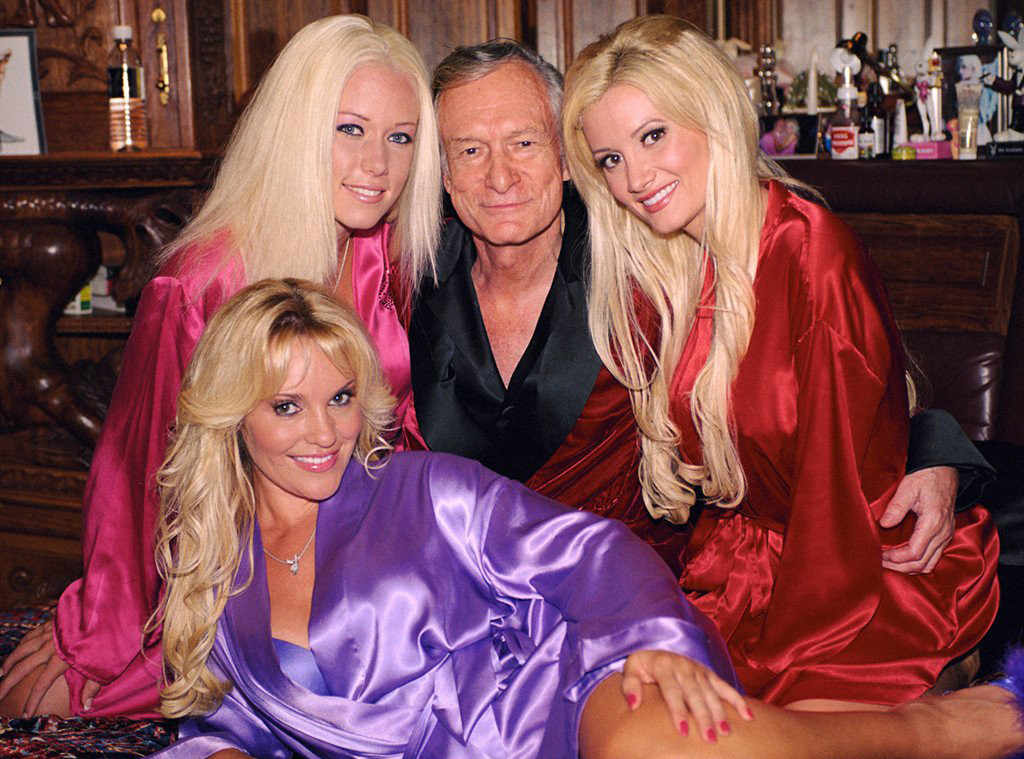 So, the big deal is that Hugh Hefner has died at 91.

I just want to have some feelings for a minute.

I was immediately attracted to the E! series The Girls Next Door as a teenager, much as I was drawn to everything lurid, subversive, shocking and classless. Even still, Hugh Hefner was portrayed as a legend, and the three girls — Bridget, Kendra, and Holly — were buxom, bubble-headed, interchangeable arm candy. The show revolved around the girls’ semi-nude antics, performed for the purpose of proving their affections for Hefner, who beamed down upon them like a benevolent dictator.

Perhaps he was more of a dictator than we’ll know: Holly Madison’s tell-all book outlined the ways in which Hefner controlled his girlfriends through intimidation and manipulation. Of course, when her book was published, she had already moved away from Next Door, and we dismissed her outcry as “sour grapes” for “getting dumped” by Hef. Of course. We wouldn’t want to believe that the legendary Hugh Hefner, famous purveyor of “classy” smut, could be anything but a kindly, if somewhat kinky, old Grandpa. The girls’ reputations took a hit, but Hugh came out shining as brightly as ever, like a pair of jewel-emblazoned pink track suit bottoms.

I said I had feelings, but I’ve only told you facts. My feelings in this are complicated: on the one hand, you have a man who has, objectively, built a successful empire on pushing the boundaries of sexuality and how it is perceived in the public eye. I’m all for the normalization of porn, open discussions of sexuality, and breaking taboos. On the other hand, I’m turned off by his personal behaviors and attitudes towards women. I don’t wish to judge his polyamorous lifestyle, as many have and many will continue to do, but for the fact that he maintained it through emotionally abusive tactics. My stomach churns when I see him being called a “hero” upon his passing. If he is to be called lauded for his contributions to our culture, should we not also view his deeds with clear eyes as well?

But we come to bury Hefner, not to praise him. He’s boring as fuck. The Girls Next Door were the real lasting part of his legacy.

And the thing is, I adored The Girls Next Door growing up! I was religiously devoted to it on weekends (while doing my homework), and the stark contrast between my own life (doing my homework) and the lives of the eponymous Girls struck me acutely. I could ask, “What young girl doesn’t aspire to be a Playboy Bunny?” for levity, but honestly, I craved it. The adoration, the power, the glamour… I didn’t know at the time that it was all misery below the surface, and that the real power was in Hef’s hands and he wielded it to keep The Girls in check.

I was young, and so was Reality TV as a genre. Older and wiser folks than me worked carefully to make sure that shows such as this succeeded at making the audience both hate the subjects and want to be them at the same time. I failed on one account: I only wanted, with all my soul, to be them. They were the REAL protagonists of the show. At the time, I underestimated them: I chalked up their success to their appearance. Looking back, I still think favorably of them, only now that I understand what they had to overcome to reach their fame, I admire them even more fervently. More than that, I respect them. I’m still a fan, but I want them to have the space to tell their stories however they see fit.

When we recall Hugh Hefner’s legacy, the women he took advantage of will likely be nothing more than decorative footnotes in his tale. For me, though, the story of a man building a successful business is far less interesting than the stories that have yet to emerge: stories of women who risked their reputations to defy sexual mores of a bygone era. Ultimately, nobody eulogizes Hefner as well, or as succinctly, as Jessica Valenti: