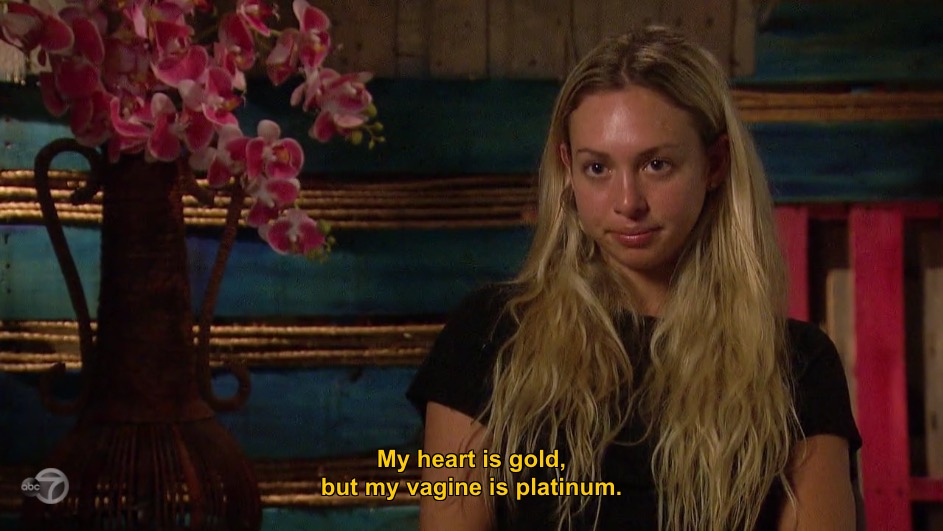 Just had a near death experience in the paper goods isle at target. It was very dramatic

I truly felt for Corinne. The other girls gave her endless guff for falling asleep during cocktail parties — I mean, who can really help falling asleep? And for having a “nanny.” Let’s be honest, what is the difference between having a “nanny” and having a “personal assistant” besides the nomenclature? Hey, I was a “nanny” to a full-grown adult once, I did everything from reminding him to take his vitamins and cutting the crusts off his sandwiches, to picking up his laundry and filling out his bank deposits. Corinne got the “villain” edit, and you know that it’s bullshit.

Is she childish? Sure. But you know what? Throwing that in her face makes you a bitch. It just does. She’s genuinely funny. She’s unapologetic. She refuses to acknowledge that “cheese pasta” is the same thing as “Mac ‘n Cheese.” She’s a problematic fave, but a fave nonetheless! And friends, she’s in deep trouble.

It comes as no surprise that Corinne was selected to join the cast of Bachelor in Paradise, the summertime season of the franchise that sees the most notable characters from that year’s Bachelor and Bachelorette seasons (and other notorious alumni) in a beachy booze-fest where the rules are made up and the roses barely matter. Filming for the season had already started…

…but was halted abruptly when one of the producers raised concerns of misconduct.

According to leaked reports, recently eliminated contestant DeMario Jackson (from Rachel’s season of The Bachelorette, currently airing) had a sexual encounter with Corinne at the pool on the Mexico set of the show, during which time the producer observed Corinne was too drunk and perhaps even unconscious to give consent.

Corinne admits that she has very little memory of the events, which occurred during filming on June 4th, but is prepared to sue the show. Here’s where shit gets really awful: apparently, not only did none of the crew intervene in her assault, they claim that legally, they can’t be responsible for watching and perhaps even filming her rape.

Cheesy pasta aside, she’s a victim, no different from the victim in the Brock Turner case. She was sodomized while unconscious and incapable of giving consent, and the horror story twist is that the bystanders in this case did nothing.

I believe women. I believe victims. I believe survivors. I have no doubt in my mind that what Corinne endured, and what the one producer with a conscience reported, was rape.

Typically, I discourage people from making judgements of the character of Bachelor contestants because we all know, the “reality” presented on these shows is not “actual reality.” They are edited to appear more sympathetic, or more villainous (like Corinne, obvs). Producers prod them to do certain things that they might not normally. These shows aren’t real.

But it’s troubling that the very little we see of DeMario on Rachel’s season of The Bachelorette sends up lots of red flags.

Upon first meeting her, he proposes marriage to her in the form of two tickets “to Vegas,” ostensibly to elope. He’s coming on very strong. When he is confronted by his at-home girlfriend (?) in episode TWO, he spins in verbal circles trying to come up with an excuse: He’s never met this girl! Ok, he’s met her, but he never dated her. Okay, they dated, but they’re done now. Rachel isn’t having it (thank goodness), and eliminates him on the spot. 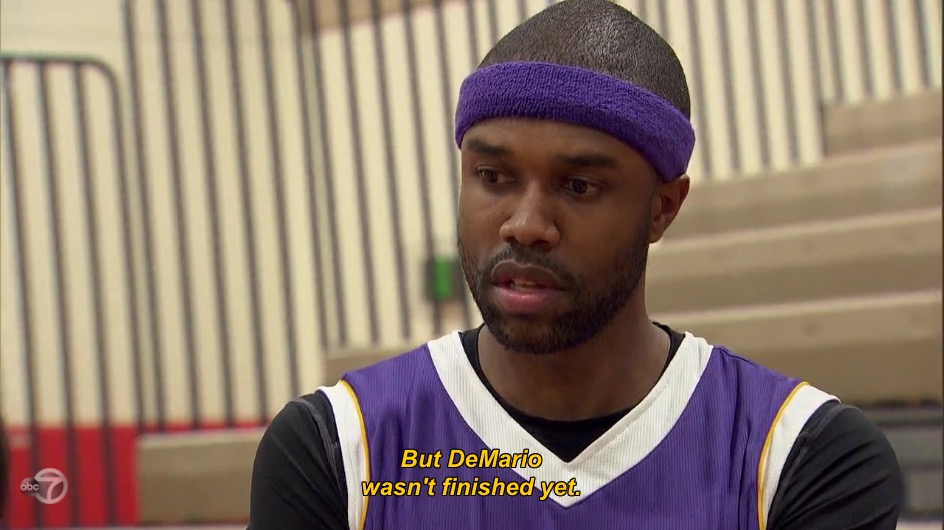 Later in that episode, DeMario returns to the mansion and we leave on a cliffhanger. He wants to speak to Rachel. He’s been sent home in no uncertain terms, but as episode 3 begins, DeMario begs for a second chance, insisting that they have a beautiful future together once they get past the unpleasantness in episode 2. Yet again, Rachel tells him in no uncertain terms to LEAVE.

But all of this terrified me, because I saw his return to the mansion to plead his case after being eliminated as a sign that he does not take “no” for an answer. Taking with a grain of salt that it’s possible he was put up to this stunt by producers, he goes directly against a woman’s clearly stated wishes to pursue what he wants. He could have walked away, you know, the first time he was eliminated! But whether it was a genuine love for Rachel or a desire for 5 more minutes of fame, DeMario ignores a woman’s “NO” and did what he wanted to do, anyway.

Which made me think… how far of a leap is it from justifying to Rachel why she shouldn’t eliminate him, to justifying raping an unconscious woman who had previously been flirting with him?

DeMario and the producers who found him not guilty of any wrongdoing in their internal investigation would have you believe that there are “gray areas.” Where a woman says one thing, but with enough convincing, she can be made to change her mind. Where a woman who gets pass-out drunk deserves to be physically violated and sodomized because she’d been flirtatious and “wanted it.” Where not explicitly denying consent is the same thing as consenting heartily, and where “get the fuck out of here” is just the start of negotiations.

In the wake of this horrifying tragedy, ABC has promised to be more careful in the future. But the fact that this has happened at all and they’re absolving themselves of responsibility is troubling. They should have stepped in before a woman was raped. They had ample opportunity. They were rolling cameras. If that doesn’t make you sick to your stomach, I don’t know what does.

I’m disgusted that we’ve allowed to Corinne to be packaged, marketed, used, and discarded while never once treating her like a human being. Just because someone is a reality TV villain doesn’t mean they deserve anything less than justice when they are horrifically taken advantage of.

DeMario continues filming Bachelor in Paradise. We’re going to see it air this summer. How much we’ll see is a question that I’m sure many are wondering, to what lengths ABC and the Bachelor franchise will go to exploit a rape victim for ratings.

Corinne is tough. And layered. Like golden corn. I hope she’ll be okay.