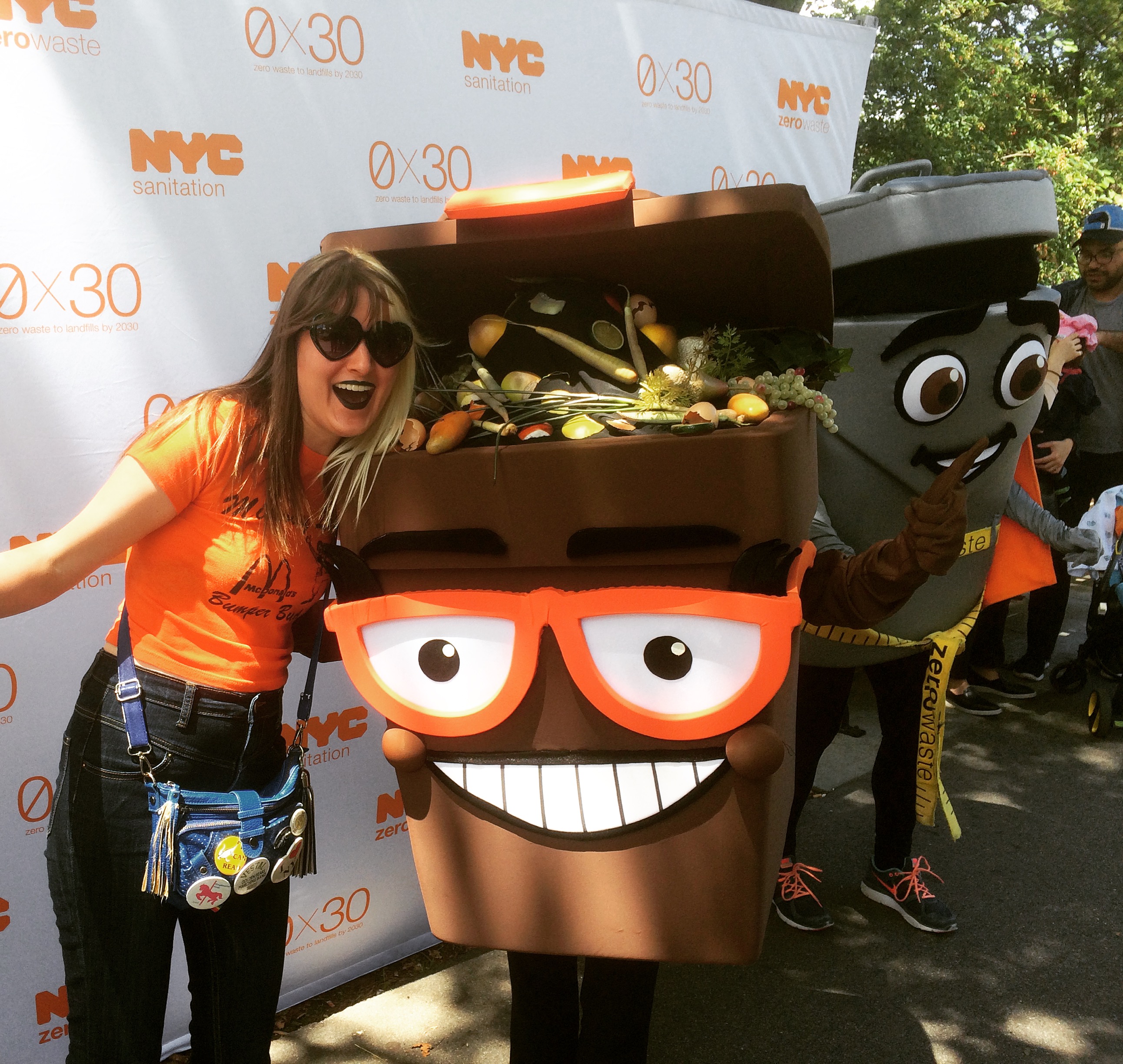 Well hello, again! It’s another weekly roundup of GOOD NEWS. Funny pictures and happy-making news items to stuff in your eye sockets when everything else on the Internet seems hopeless and depressing.We begin, as we most often do, with a personal update. Because you love meeeeeee, that’s why you’re here!

First up, I bet you’re dying to know WHO IS THAT HANDSOME TRASH that I’m canoodling with? Over the weekend, my boyfriend & I went out to see the Greenpoint Open Studios, with a pit stop at the Saatchi Other Art Expo and here at this pop-up green festival in McCarren Park. I saw characters dressed up as trash bins and a BROWN BIN and I knew I had to take a picture with him. Brown bins, you guys, are compost bins you can compost in even if you live in an urban apartment!!!

This was a short work week for me, wrapping up a project, with a little break before the next one starts, which is fine. My hormones have been making me cranky as hell and my face has exploded into angry pimples, but instead of hiding inside and moping, I took myself on a field trip to the Queens Center Mall! I haven’t been in FOREVER, and I had a gift certificate to Bath & Body Works and they were having a massive sale soooo…. 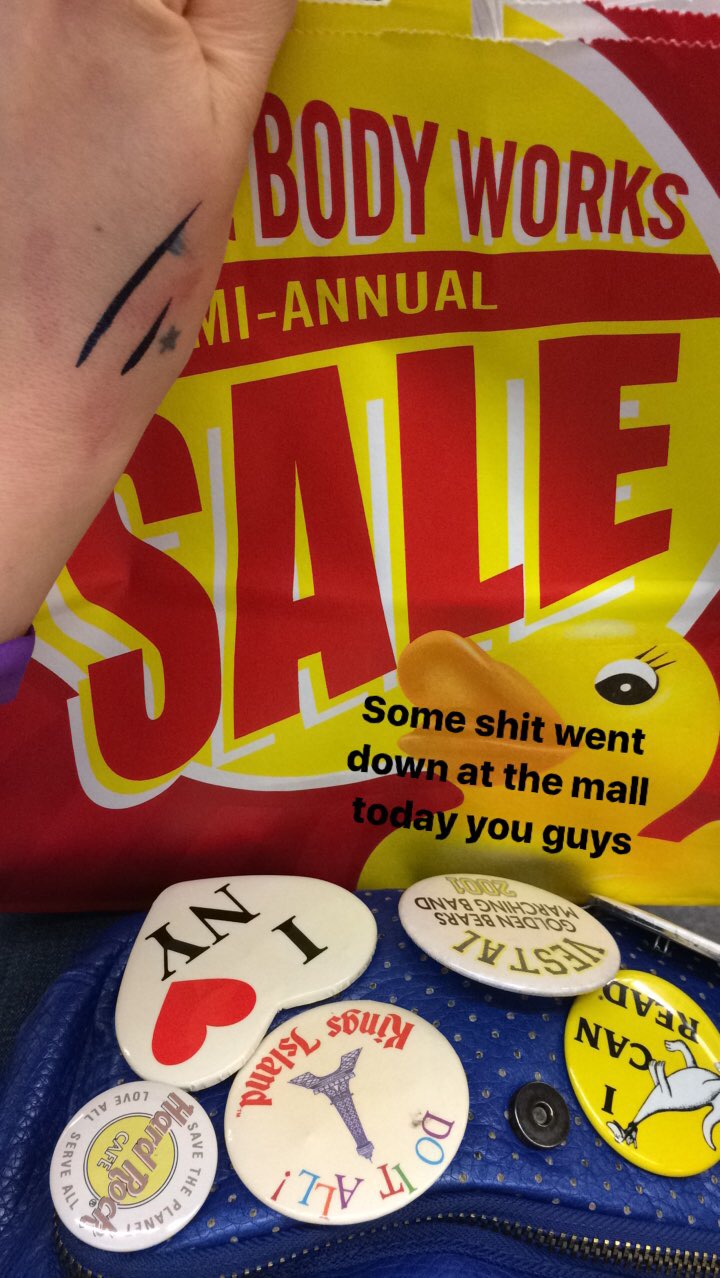 Then head over to Facebook and check out this group called, simply, “Doge.” I am a big fan of their dog memes and if we’re friends on FB you’ll see that I’m constantly sharing them! Like this one: 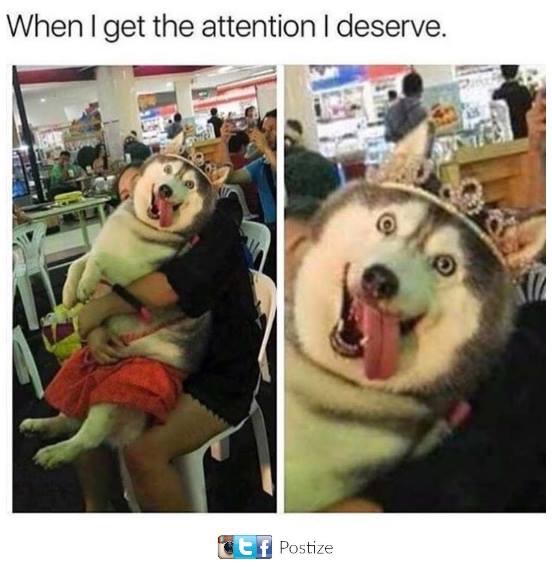 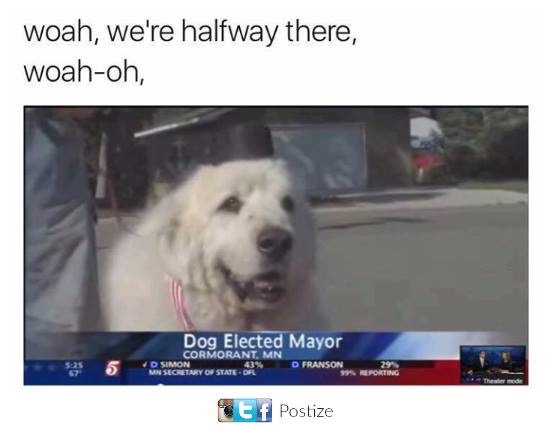 Apologies for getting that song stuck in your head.

My dad has been peeling oranges for my lunch since kindergarten & on my last day of high school I got this instead pic.twitter.com/N8B2qb43qA

Did… did her dad think she didn’t know how? This makes me laugh because this is totally something my dad would do, right down to drawing an emoji on it. Printing out articles to hand to me, as opposed to sending them to me digitally. That’s cute.

And speaking of being autonomous adults who can do things for their own damn selves, THIS Huffpost article (written by my favorite Internet author btw) made my Grinchy heart grow three sizes. It’s about parenting blogger Beyond Moi’s recent viral Facebook post explaining why she doesn’t force “modesty” on her children (specifically, her daughters). If you’re sick of “modesty” and “rape culture” and “shame,” this mom’s take will be a breath of fresh air, I guarantee you’ll love it!

This pup is SO HAPPY to see her dad after he was gone for two months — the sounds she makes are priceless. pic.twitter.com/ib3Nsqvb54

My favorite part of this whole video, besides the fact that it is adorable and pure, are the subtitles that tell you what the dog is thinking, like (can’t) and (can’t even)

You see amazing things in the parks of LA! This guy was Bench-pressing this goose for 10 min. … the goose LOVED it!! pic.twitter.com/VNtis6UJ

LA, are you OK? This Los Angeles man claims the goose was into it… hey, if it’s consensual!!!

I am twelve, so I can’t help but giggle whenever Jeff Sessions is compared to a Keebler Elf. So I found this very amusing.

If it’s been a tough week for you, put your speakers on MUTE and watch/relate to this baby elephant who just can’t, he won’t, he refuses to even anymore. The tantrum takes a while to kick up, but once it does, I find it almost cathartic to watch such a majestic creature roll around in dirt as if to say NOOOOOO I DON WANNNAAAAAAAAA!!!!

I was just talking about this video the other day, and my neverending love for the inflatable T-rex suit trend.