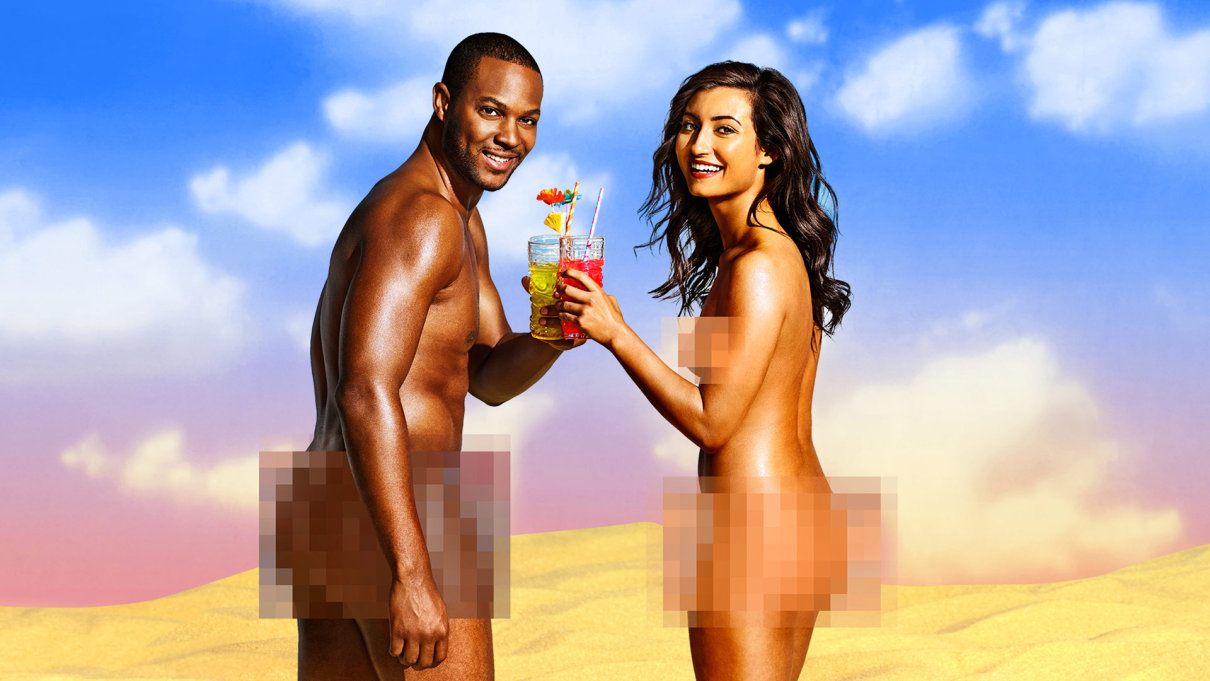 You know me. For one, I will never NOT click on an article that promises that I “[…] Won’t Believe What [X celebrity] Did To Her Hair [shocked emoji]!” And I never met a reality dating show I didn’t like.

Yes, I’m still obsessing over this season of The Bachelorette, even though the dating pool has been whittled down to The Four Guys In The Mansion With The Exact Same Too-Hip Haircut. Type? She has a TYPE? Nah!

And my love of ____ of Love shows is such that I could rattle off who was kicked off in what episode of which season, and their real name (if they had a Flav-given nickname). Side note: did you know that Real (Chance’s brother) from I Love New York and the subsequent spinoff, Real Chance at Love, DIED? It’s true. See? I love this shit.

I’ve even made it to season 3 of Millionaire Matchmaker, despite mixed feelings about Patti Stanger. She is a problematic fave.

So when I saw ads in the subway for Dating Naked, I laughed and said, “That’s terrible.”

…….So I’m halfway through the second season on Hulu Plus, and I am actually really surprised at how much I’m liking this. If you’re really offput by the “naked” part, you might be a never-nude. Nah, dude, it’s cable television! Even on Hulu, they still provide ample fuzzing-out of nipples, dicks, and buttcracks. After a while, you kind of forget that everyone’s naked, because they might in fact be wearing Speedos and bikinis made out of cumulonimbus clouds, hovering around their objectionable bits.

There’s an interesting formula to this setup: a heterosexual man and a heterosexual woman are both the daters of the show, calling the shots, looking for love, etcetera, etcetera, etcetera. First, they date each other, to see if there’s a “connection.” They talk so much about “connection,” you’d think they worked for the phone company. Two new people arrive on the island, go on solo dates with the contestants separately. Then the daters choose which of those two remains on the island, that’s their “keeper.” Next episode, two new nudie cuties, two new dates, and they can choose to keep one of those as their “keeper” to carry over to the next episode, or eliminate both the new folks and continue to pursue their “connection” with the keeper, or focus on their attraction to each other. Sounds like gin rummy — keep, discard? By now you’re not even thinking about the naked part anymore!

But you’re probably still wondering, “Who in their right mind signs up for a dating show where they’ll have to be on TV stark naked?” Um, pretty weird people, as it turns out. So yes, the choices of dates varies from perfectly nice normal people, to an abrasive man twice the young lady’s age who interrogates her about how much she weighs and whether or not she does “ab stuff,” to a manipulative lingerie model who intentionally gets a girl she views as a “threat” drunk and then throws her into the pool to secure her place as “keeper”… and I’ve completely forgotten about the naked element.

If you’re like, “Aww, Meghan, I’m actually kind of bummed! I have heard of Naked Dating and hypothesized that such a concept surely heralded in the most depressing dating show that could possibly exist! I am sorry to hear that I was wrong, and that we are still approaching reality dating with a modicum of sense and good intent.”

Are You The One?

AYTO is where The Bachelor meets The Hunger Games. First, I’m going to float you the premise: 10 heterosexual men and 10 heterosexual women on an island. Extensive background checks have been performed on all of them by “experts” who have determined each dater’s “Perfect Match.” Yep, for every woman on the island, there is a man who is her “Perfect Match,” and vice versa. The object of the game (because there’s a $1,000,000 prize, so yes, it’s a game) is to try to find your “Perfect Match,” as chosen for you by the experts. So, it’s not really about finding LOVE. It’s about gaming the experts to try to figure out who they *think* you should love. There’s also a space-age “tiki hut of truth” where two couples in love can get scanned dramatically by lasers and told whether or not their love was meant to be. Sorry! Oh gosh, do you remember the movie Timer, where you have a countdown clock embedded in you, ticking down to the moment you meet your soulmate? Uh, strongly recommend, and yes. This is creepy.

I definitely feel for John, who was so convinced of his “Perfect Match” with Julia that he seems no longer interested in playing the game after the Truth Booth assured them that they were NOT A MATCH. Julia may have drunk the Kool-Aid, but John is convinced that love should be about more than just the game. Alternative title: If You’re NOT The One, I Don’t Know What Love Is Anymore. I cannot WAIT to see where this goes.

Meanwhile, I continue to pitch MY idea for a dating show, which is simple: it’s just like The Bachelorette, only instead of men, you’re dating puppies. I would watch the shit outta that.