WARNING: This is a review of the Netflix original miniseries Stranger Things! If you haven’t seen it yet, this will not make sense to you! If you haven’t gotten around to watching it, but think you might still go for it, DON’T READ THIS YET! Also, spoilers. 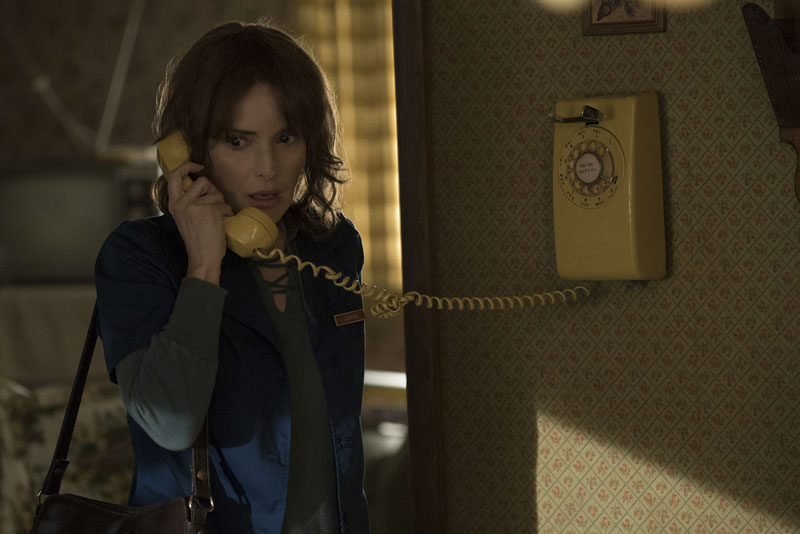 Before we get all negative, let’s just say, “Hats off to Netflix!” They create bold original content that usually pushes the envelope in storytelling. I was very impressed with Orange is the New Black. While I didn’t personally enjoy Jessica Jones, I can appreciate how someone might. And I am setting my clocks in anticipation of the new season of Unbreakable Kimmy Schmidt, so I think it’s fair to say Netflix is one of my favorite TV channels.

As we saw with House of Cards, Netflix’s structure and disregard for ratings allows them to take programming risks that Hollywood and network/cable TV would run afraid screaming from. Rather like the protagonists in Stranger Things.

As a miniseries, the first thing comparable that pops to my mind is Twin Peaks. One thing Stranger Things does well is to keep its multiple woven plot lines organized. We follow three sets of protagonists through the mystery:

So that’s the characters, and as far as plot is concerned, I’ll take you to the boardroom where the series was pitched:

Netflix exec: So, I see you want to do a Stephen King inspired miniseries for our network. Can you tell me more?

Producer of Stranger Things: Yes! It’s set in the ’80s!

Netflix: Cool! A monster! Okay, what type of monster? Is it a vampire, like The Lost Boys?

PoST: No, this is a totally NEW monster. Completely original!

Netflix exec: Okay, great. Tell me about this monster.

Netflix exec: …Yeah, it’s a monster, but what does it do? Like, what’s the origin story, who created it, what does it want, how do you kill it, what’s it’s Achilles heel, why is it evil?

Netflix: Right, I got that. I’m just trying to figure out what makes this monster important.

Netflix exec: Well, that’s interesting, can you tell me more about the parallel universe?

Netflix exec: So, is that all you have?

Netflix exec: Okay, how does the government conspiracy come into all this, with the monster and the parallel universe?

PoST: The government secretly turns a little girl into a telekinetic weapon! It’s a conspiracy!

Netflix exec: Like River Tam in Firefly? That’s kind of interesting. Okay, so did the government also make the monster? Create the parallel universe?

Netflix exec: Okay, okay, okay. So on the one hand we’ve got a monster from a parallel universe, and on the other hand you’ve got a highly trained secret weapon in the form of a little girl. Do they fight each other?

PoST: Oh…well…I guess they could, if you want them to.

Netflix exec: Anything else?

PoST: Yeah! We’ve got Wynona Ryder on board to play a frumpy single mother!

What we end up with in eight episodes of varying lengths is a story that doesn’t feel 100% thought-out, but rather, stitched together from scraps of better pieces of fiction like a nostalgic quilt. The Goonies, Pretty in Pink, Twin Peaks, Harry Potter, Firefly/Serenity, Nightmare on Elm Street all seem to be weirdly ripped off by this series that dwells on details we don’t really care about and pulls a deus ex machina out of its ass whenever it can’t write its way out of a complicated situation. All three character groups are trying to find a missing boy who we are led to assume was killed by this mysterious monster. In the penultimate episode, they unite….and then promptly disband again, for no real reason other than to — I assume — stretch it out into an 8th episode. In this decision, the Adults walk into a trap at the Secret Government facility, and the government interrogates them, and then… walks away. Okay. I was so disappointed by the ending, I felt cheated out of the whole experience.

Which touches on another thing the show has been receiving, as I see it, false praise for. Though there are female characters in the show, they are not empowered. In The Adults group, you have Wynona and Hopper, the sheriff. 50% women! However, Hopper does 100% of the problem solving and Wynona does 110% of the hysterical screaming. She is dismissed as delusional, even though she was right all along! She is portrayed (and Wynona really leans in, too) as the shrill, unhinged white trash woman who goes to pieces after her son dies. She doesn’t actually have a character at all, she’s defined by being a grieving mother. In the Sexy Teenage trio, we have Nancy (and for a time, Barb, whose entire character before dying was focused around telling Nancy not to have sex). Nancy is a little empowered, she takes equal part with Jonathan in planning to kill the monster, and she unapologetically chooses to have sex with the popular guy. She defies the popular trope of the nerd getting screwed over by the popular guy, and yet, in spite of that, she has very little actual character development. What do we really know about her? She likes to study and her mom doesn’t want her to have sex. And then there’s Eleven! Eleven is a huge disappointment. Her character is unimportant because she’s a creation of the evil government, so she has no childhood or background, and in the end, she sacrifices herself to kill the monster. She was just a weapon all along. She starts to form attachments to the Goonies gang, but dies before anything is resolved. She is afraid of being touched one minute, and yet is kissed against her will in the final episode as part of Mike’s character development. And that’s IT! Three women, that’s all, in the whole show, unless you count women who show up as set dressing.

If anyone wins here, it’s the set decorator. Whoever designed the scenes took great pains to faithfully recreate the 80’s in all its tacky glory. The most breathtaking visuals were the simplest: a lineup of vintage bath products and beer cans on Sheriff Hopper’s bathroom vanity. The plaid walls and curtains of a teenage boy’s bedroom. The floral armchair. Retro TV’s (with retro commercials, fleetingly!). Ultimately, it is these unimportant details that make Stranger Things LOOK like a decent miniseries — but I’m sad to say, in this case, appearances were deceiving.

Was Stranger Things terrible? Not entirely. Was it a waste of time? Probably. Would it have been a good 2-hour movie? Oh, for sure. Although a letdown, Stranger Things is interesting because it is experimenting with a new type of entertainment that only modern technology could have made possible. So when we applaud Stranger Things for existing, it is as though we are patting a kindergartner on the head and attaching their fingerpainting attempt to the refrigerator. “You did it,” we say warmly and genuinely, only because higher praise would be phony and false. Stranger Things exists, that’s for sure. You did it! Season two will reveal whether this is a jumping-off point for a new genre of horror, or whether the kindergartners will get lazier and rely on jump-scares, rough-around-the-edges CGI and fake blood — lots of fake blood — in lieu of plot, suspense, and character in the future.