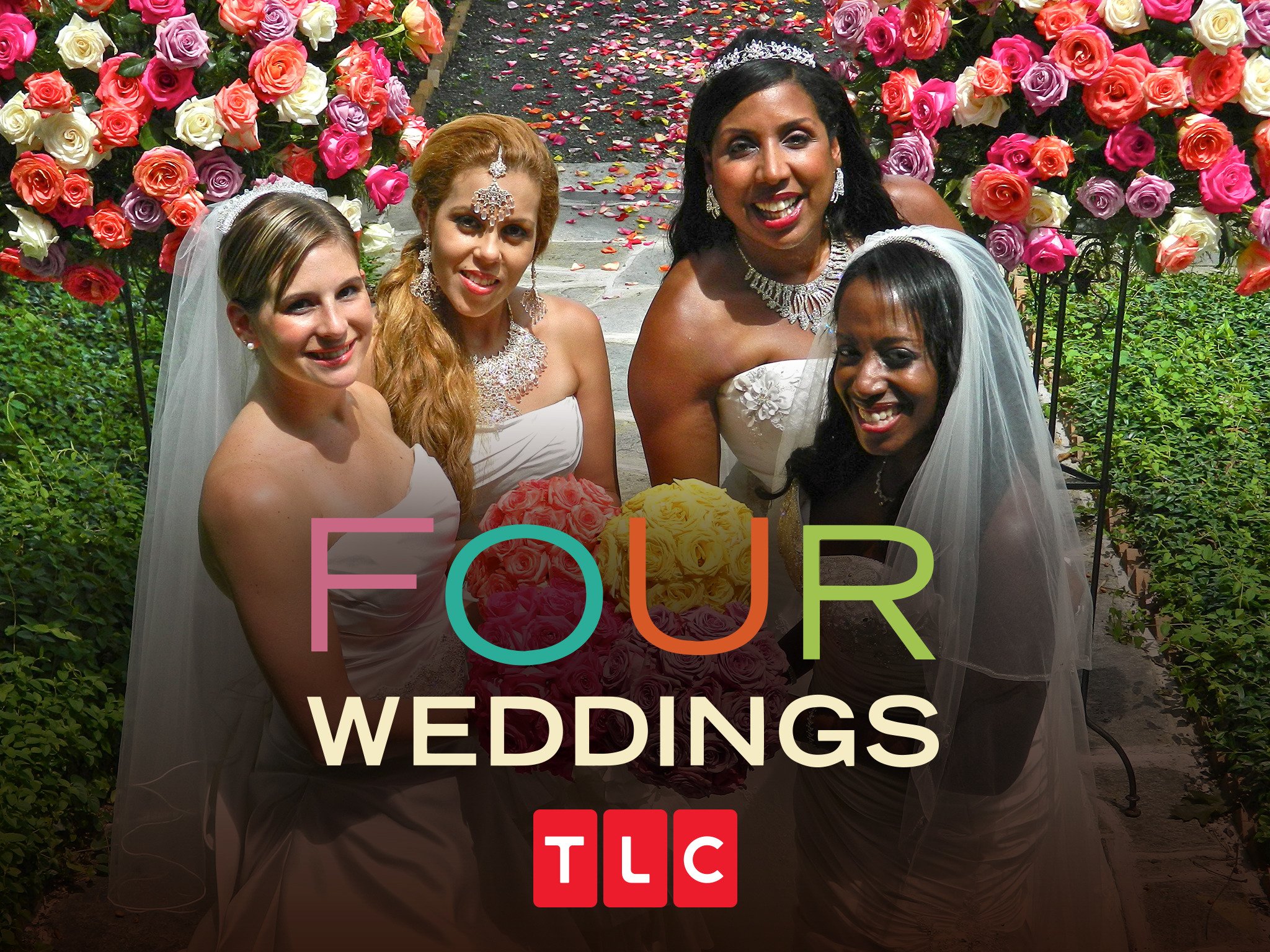 In case you didn’t know, Four Weddings is on Hulu. Go, go, go!

There was a time in cable television when we went absolutely bonkers for wedding-related content, running the spectrum from the saccharine Say Yes to the Dress to the hate-watch Bridezillas. Does anyone remember Whose Wedding Is It Anyway? Because I DO. I lapped up every program that promised to deliver wedding-related content, and I remember watching the first season of Four Weddings excitedly on my parents’ cable. I was NOT disappointed.

Here’s the premise: in one metropolitan area, four ordinary women are getting married around the same time. They attend each others’ weddings as a group, judging them on every aspect but specifically on a set criteria, and then they rank each others’ weddings based on a rubric to award one of them with a luxury vacation as a “dream honeymoon.”

Here’s the twist: if you watch enough episodes of Four Weddings (as I have), you’ll learn that there’s a basic through-thread for all of these episodes. It comes down to pitting women with very different tastes against each other, setting the viewer up for an hour of snarky, back-handed compliments like, “It’s not the dress I would have chosen, but it suits her.” As with any reality show, you have a standard cast of characters:

The mix of different and opposing tastes and personalities basically guarantees that they will all be miserable and hate each others’ choices! Uptight Bride hates sitting outside, so if you’ve chosen to get married outdoors (which seems to be the choice 9/10 times), she’s gonna hate it. Quirky Bride thinks your chicken dinner is bland and dry. Rich Bride resents being made to stand during cocktail hour — was there not enough money in the budget for chairs?? And everyone hates the fact that Cultural Bride served TACOS at the reception (“I mean, they’re a fun way to incorporate her culture, but not really fancy enough for a wedding, don’t you think?). Oh yeah! It’s condescending, problematic, frustrating, and nitpicky.

The overarching theme is this: Every bride is SUPER OPINIONATED, and the further your wedding deviates from her wedding, the more she’ll hate it. Everyone claims that they’re wedding is going to be “original,” but they hate the way everyone else expresses their individuality through their weddings. It’s a rule. Every offbeat touch or unique idea loses the couple points, but ironically, brides also get deducted when their weddings are too “predictable.” Honestly, you can’t win. That’s what makes this show such a hate-watch. It’s a non-stop barrage of picky eaters, scrunched noses, and complaints.

Obviously, it’s too toxic to watch for any prolonged period of time. The constant barrage of negativity being hurled at each other is the whole point of the show. But the thing I don’t get is, objectively, these weddings are all… really the same? There’s an outdoor ceremony, a disappointing cocktail hour, then strobe lights and a DJ. Like, to judge them against each other almost feels like an exercise in futility. They’re remarkably similar. Maybe one detail is different (maybe one ceremony takes place inside), but it’s honestly hard to tell them apart. There’s a great deal of wedding ennui radiating off of the women themselves. You can tell that they’ve attended a lot of friends and families’ weddings, so they feel very comfortable asserting themselves as experts when it comes to attending and critiquing the weddings of three perfect strangers. “Typical chicken!” “Not as many flowers as you would expect.” “Long ceremony.” I shudder to imagine these brides watching their episodes air, eagerly expecting to see themselves on TV, and in the process, getting an earful about what the other brides *really thought* about their dress, their food, their ideas. Ouch.

Who would sign up for this show, I wonder? Who is confident enough in their tastes and style to set themselves us to have their wedding, one of the most personal and emotional days of their life, judged so harshly on cable television??? I’m not really sure, but I’m glad people do sign up for the honor, because damn, I love Four Weddings.