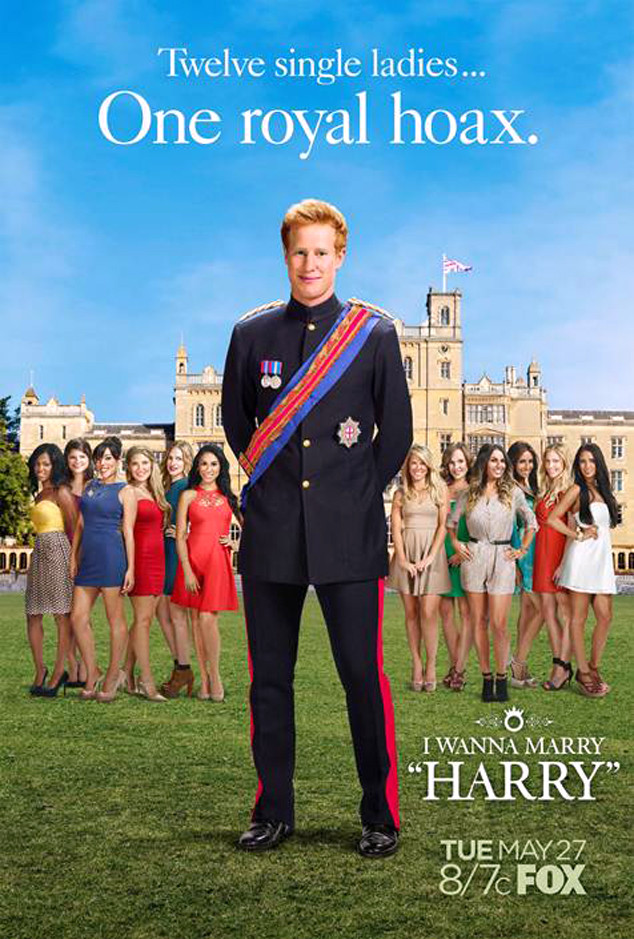 As I sit here watching I Wanna Marry “Harry,” the FOX reality show where 12 American women vie for the heart of a man they’ve been led to believe is Prince Harry, it occurs to me how mean reality television used to be.

Nowadays, the biggest reality TV program is, without question, Keeping Up With The Kardashians. Or maybe it’s the total sum of all of the Real Housewives franchises & spinoffs. The popularity of Queer Eye for the Straight Guy‘s recent reboot and the cult American following of The Great British Bake-Off show that it’s possible to make reality TV that’s heartwarming without being cheesy (looking at you, So You Think You Can Dance) or having sinister dystopian undertones (ahem, American Idol).

Speeeeaking of Ryan Seacrest, he’s the producer of I Wanna Marry “Harry” and, believe it or not, this shit aired in 2014. Just two years B.T., Before T-….he Election That Officially Destroyed Our Faith In All Humanity. I fully believe we froze in time on 11/9/16, so by that math, I’m still 32, and this fuckery was two years ago. And I Wanna Marry “Harry” makes The Bachelor look like Tidying Up With Marie Kondo. It’s brutal to watch. Everyone is miserable, unless they’re living in the lie. It’s a kind of cruel that I haven’t seen since Joe Millionaire.

It’s been about 20 years since reality TV began to dominate the pop-culture landscape, so it’s easy for us to forget this, but — old-school reality TV used to all be brutal! After Survivor, network reality definitely took a turn to the extreme. Not just with regards to Fear Factor, but also Joe Millionaire. I believe, however, that there was no worse offender than The Swan. Okay, hear me out on this: Fear Factor may have buried you alive in a case full of scorpions, and Joe Millionaire made you believe you were in love with a man who was something he was not, but who among us hasn’t had to squash a gnarly bug alone in our apartment or dated a guy who fed us straight lies until he broke our hearts? The Swan’s premise was that they could pluck a woman out of obscurity, force her to undergo painful surgeries and adhere to strict diets, isolate her from family and friends, forbidding her from even seeing her own reflection in a mirror — completely breaking down her identity and sense of self — until trotting her out on a national stage to compete in a pageant against other women plucked from obscurity and forced into painful surgeries and isolated from their support networks, yadda yadda yadda. BRUTAL.

There were actually a lot of truly toxic “early” reality shows that capitalize on humiliating people, pushing them to their psychological limits, and showcasing their embarrassment for entertainment. What is “auditions week” of American Idol, if not to make fun of the William Hung’s of this world? To take a happy, ordinary person, dangle the opportunity for fame in front of them, and then watch them self-combust and film it for shock value! A lot of people dismissed America’s Next Top Model, which would be underestimating them for their cruelty. I’m not just talking about the haircuts. The modeling challenges frequently involve all the typical trappings of a Fear Factor: bugs, snakes, heights, drowning, being buried alive. And don’t forget to SMIZE!

While all of this is happening on network television, cable TV is starting their own reality genre. Now, you’d think that cable would really go there, you know, twist the knife, in a way that the networks would be afraid to do. But the cable shows pioneer a gentler genre of reality TV: a more documentary style which basically just 1) finds people the audience would want to watch and 2) puts a camera on them. I wanna say MTV was the pioneer of this style with The Real World, and its simple premise. MTV True Life documentary series was just that: the real lives of people living as young parents, addicts, or people struggling with extraordinary circumstances. Spinoffs here include My Super Sweet Sixteen, Engaged and Underage, 16 And Pregnant and of course, the long-running Teen Mom and its various spinoffs. Taking regular people and putting a camera on them, which peaked with the cultural phenomenon that was Jersey Shore.

When VH1 joined suit, there became the new category of what I believe they called “celebreality.” The Surreal Life, Strange Love, Newlyweds: Nick and Jessica, Britney and Kevin: Chaotic, The Osbournes, The Anna Nicole Show, Flavor of Love, Rock of Love, and of course, the most famous of all, The Kardashians and all their various spinoffs. When you think “reality TV,” your mind absolutely conjures up the Kardashians.

There was a time when you’d absolutely associate “reality TV” with Ryan Seacrest. YES, the co-host of Live with Kelly and Ryan cut his teeth as host of American Idol, arguably the reality series that legitimized the genre and cemented the reality trend as being more than just a “trend.” Ryan Seacrest has not only been executive producer on all of the Kardashian spinoffs, he’s also executive producer of I Wanna Marry Harry, which proves there’s no lengths he won’t go to to mine other human beings’ misery for money.

This is what reality TV has done: gone from burying young women in scorpions and dangling them off of balconies for photoshoots, to peddling them Kylie lip kits and laxative teas. Have we gotten less cruel? I’d have to say “yes,” but then again, we may have to wait decades to see the long-term effects of lip fillers on an entire generation of today’s youth.