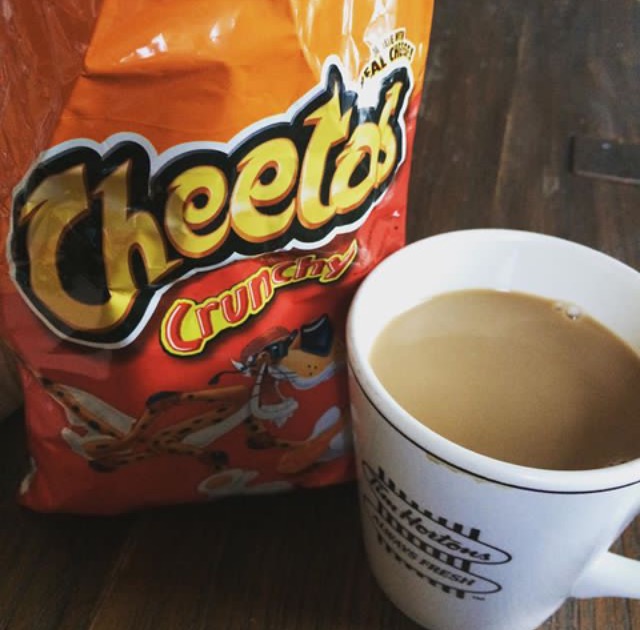 Hello, my name is Meghan. I am a gluten-free pescetarian.

I stopped eating gluten four years ago, right after my 29th birthday. No diagnosis. Actually, a doctor told my mom to stop eating (so much) gluten and I, in the throes of debilitating heartburn and diarrhea that made me miss 3 days of work each month, decided to try an “elimination diet.” Week one was gluten. At the end of the week, I felt amazing. So that was that.

As for the “pescetarian” thing, I don’t like meat. I’m an adult, I don’t eat things I don’t like. I don’t care what you eat. I’m not gonna eat sausage, but I’m not gonna quote Upton Sinclair’s The Jungle at you if you do. So. Whatever.

My dietary preferences — it’s fair, let’s call them preferences — sometimes make me feel like an asshole. Like when we go to three different restaurants to find a lunch spot and I can’t eat anything there because OOPS! Soy sauce or OOPS! Bread! 99% of the time, I’ve got a snack in my purse, and if we gotta, you can eat, and I’ll snarf a Larabar while we’re walking. It’s fine. I’m the asshole. I don’t mind!

But sometimes, I feel profoundly broken. Like when I’m having a blast at a wedding, and all of a sudden my stomach rumbles and I dash to the bathroom and have a …. blast, let’s say, and we have to dash to a Lyft and hurry home because I’m going to be sobbing into the trash can on my lap sitting on the toilet sweating all night long, and I hate myself for not being more careful.

I hate to dwell on the negative.

Have I ever told you The Tea Story?

It was Christmas 2013, and I’d been gluten-free for about 4 or 5 months. My psoriasis flare cleared up, my hair stopped falling out, and my bowel movements because so regular, you could set the atomic clock by them. Tick, tock, flush! I felt better than I ever had, like a veil of reality had been lifted. It occurred to me that I’d just always accepted that being alive meant being slightly sick to your stomach at all times. Now I walked down the streets of New York a changed woman! Bopping along and nodding at all the other generally healthy people, who didn’t live in fear of getting trapped on the E train to Forest Hills without a toilet!

Then, I went home for Christmas.

I was careful! Or, I thought I was. I was offered a cup of tea — tea! And some gluten-free cookies.

Not only did my insides immediately turn into a cement mixer, that old familiar feeling of being WAY TOO AWARE of my digestive process, but my chest (my roses!) broke out into an itchy, bloody rash. I stopped eating the cookies, I stopped eating pretty much everything, and for the duration of the holiday, all I can remember is eating canned green beans and tuna (with a little salt) because I didn’t trust any food and drinking that tea.

Ya ready for the kicker?

That tea, I later learned, contained barley malt, which triggered an INTENSE reaction and caused my rash and all the other deeeeelightful stuff to happen. Merry Christmas, Ho Ho Ho.

I am happy to report that I eat things. Normal things! Not just canned green beans and canned tuna straight from the can, not anymore!

So when people hear about my…odd…dietary label, they usually ask me, “So, what DO you eat?”

And I cheerfully reply, “Lots!”

But mainly, it’s this:

what the fuck am I going to eat for breakfast? Bacon and waffles? Fuck no! Breakfast can screw itself. For breakfast, I’ll usually eat:

If I’m at home, I’ll use this opportunity to cook something for myself. For me, “cooking for myself” usually means:

I’m snacky, and I won’t deny it. I wake up at 5:30, and I’ll usually have lunch by 10am, so around 3:00 I’ll get hungry and need something to tide me over until dinner, which could be as late at 8 or 9. Snacks are easy for me to find, amazingly! Trader Joe’s has the BEST snacks.

If I’m cooking for myself and my boyfriend, I’ll usually put in more effort. I’m working on perfecting my cooking methods, so I’ll find something I want to learn how to cook and then just practice that OVER and OVER until I’m happy with it, and then once I’ve got it, it’s so easy, why not just keep making it!

But if I’m on my own for dinner, I’ll be super lazy and either make myself a quesadilla or a packet of the same Indian food I had for breakfast.

Not gonna lie, going to restaurants is stressful. There’s a dual dichotomy of worrying about finding something on the menu that I’ll be able to eat, then worrying about being an asshole and requesting a change of venue if there isn’t something on the menu that I can eat, and also worrying that I’ll eat something that will give me horrible vomitting and diarrhea while I’m trying to enjoy a night out! That last thing happens more often than I’d like, but I’ve found a few things that tend to be safe: