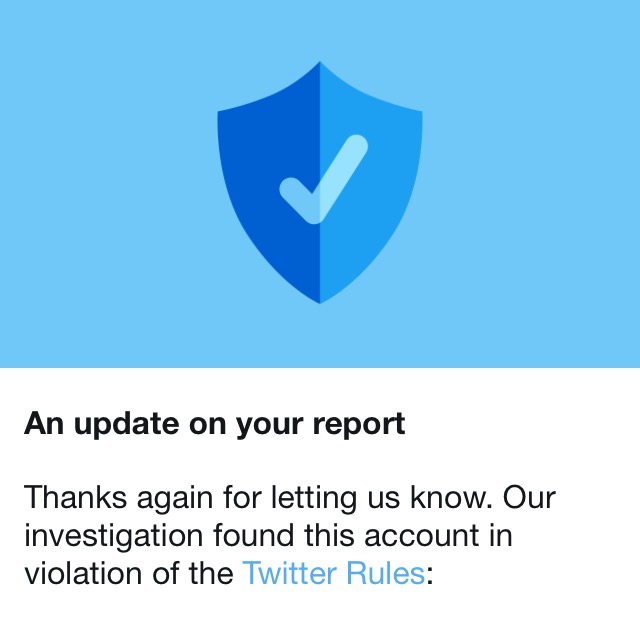 Let me tell you about my new favorite hobby:

So you know how the world is shit, right? Largely because of racist, sexist, transphobic, islamophobic, homophobic assholes?

Well after the election I was REALLY MAD about them. I felt like they had stolen my American Dream from me! I went to protests. I donated to Planned Parenthood. I thought about what special skills I had that I could contribute to the Resistance.

Then one day on Twitter, I clicked on a harmless hashtag and was enjoying my little scroll when I saw a tweet so flagrantly offensive that I was moved to hit that “report” button. You heard me. I’m a special snowflake, and I harnessed my Elsa snow-freezing powers. It felt kind of good. Small, but good.

Since then, it’s been my new little pet project: clicking on hashtags with the sole intent to find abusive tweets and report them. Some days I feel good about this: I’m crawling into the belly of the beast and making the Internet less horrible by drawing Twitter’s attention to users who violate their Terms & Conditions. Some days I feel a bit foolish: clicking on sexist, racist, transphobic trolls and going through these motions, what for?

And then I get a notification like this, and I feel like a tiny, everyday superhero. Out of the HUNDREDS of abusive trolls I’ve taken seconds out of my life to report, ONE USER is barred from the site, and their hateful rhetoric will never reach vulnerable eyes & minds.

Am I the Erin Brokovich of Twitter? Maybe not. Am I a whistleblower? Maybe. A hero? Oh yes, definitely. I like to think of myself as a knight: donning an armor of thick skin and subjecting myself to the worst of Twitter in order to do “REPORT BUTTON BATTLE” with trolls and dragons and MRAs.

Do you “report tweets” for fun? Would you like to start? Let’s join forces, together. I highly recommend it, if you’re bothered by the rise in hate speech and harassment. Yes, it can be disturbing and upsetting to have to look at all that hate and ignorance, but once you send of that report, it’s much easier to “Let It Go.”